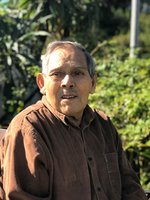 Apolonio Ramirez, lovingly known as “Papá, passed away peacefully in Davenport on November 27, 2019. He was 85. Born February 9, 1934 in Leon, Guanajuato, Mexico, the son of Jesus and Silvestra Ramirez. He grew up in Leon after moving from El Jaralillo. His father taught him to plant crops as a young boy. Papà loved animals.  As a boy, he tamed a small black donkey who he lovingly called “Fly” because he was black. As a young man in Leon, he owned and operated his own taxi cab. Papà married the love of his life,” Lula” as he called her, in 1955.  After moving to the U.S. he settled in Pescadero where he brought his wife and two young children. They later moved to Davenport. Papà  worked as a heavy equipment operator for the Campbell Soup Company. He retired after 39 years in 1999. He was very proud of earning his United States Citizenship.

Papà never lost his love for farming. He loved working in his garden where he grew Chili Peppers, Cilantro and Tomatillo. He gave one hundred percent of his crops to neighbors, friends and family. He was happy gardening, but even happier gifting his vegetables to others.

Next to his wife, his children were his pride and joy. He instilled in them that at the end of the day, their good name was all they had. Papà reminded his children that a sincere greeting should never be denied to anyone. Papà loved all children. He was a wonderfully imaginative story teller. He inspired many with his genuine care, love and sage advice. He was deeply faithful and a lifelong member of Saint Vincent de Paul Church in Davenport. Papà will forever be in the hearts of those who knew him.

He is survived by his sisters, Manuela Ramirez and Elvira Ramirez in Leon; his daughter, Irma Vega and her husband Agustin of Santa Cruz; son, Polo Ramirez, Jr. of Davenport; daughter, Laura Ramirez of Santa Cruz; sons, Oscar Ramirez and his wife, Teresa of Roseville, CA and Don Ramirez and his wife Christina of Scotts Valley. He is also survived by seventeen grandchildren, twelve great  grandchildren, one great great grandchild due in January 2020 and numerous nieces and nephews.

He was preceded in death by his wife of 52 years Lourdes O. Ramirez in 2006; his parents, Jesus and Silvestra Ramirez; brothers, Antonio, Lucino and Eulogio Ramirez all of Mexico; his sisters, Nicolasa and Paula Ramirez also of Mexico.

A Mass of Christian burial will be celebrated at St. Vincent de Paul Church 123 Marine View Ave, Davenport, CA on Wednesday December 4, 2019 at 10:00 am. A vigil prayer service will be held at Benito & Azzaro Pacific Gardens Chapel 1050 Cayuga St, Santa Cruz, CA on Tuesday evening at 6:00 pm. Friends are invited to call at the funeral home chapel Tuesday from 5:00 pm until service time. Interment will be at Holy Cross Cemetery, 2271 7th Ave, Santa Cruz, CA  following the funeral Mass.

Memorial contributions may be made to Hospice of Santa Cruz County 940 Disc Dr, Scotts Valley, CA 95066 or to Our Lady Star of the Sea Church Endowment Fund, 515 Frederick St, Santa Cruz, CA 95062.