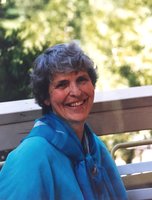 Margaret (Peg) Smith left us peacefully in her sleep on the morning of December 28. Born in Coronado, California, she was the youngest of Helen Williams Dubarre and Leroy Lorenz’ three children. With her warm and loyal heart, her generosity, and her bright and vivacious spirit, she will always be a guide and inspiration to the family and friends she leaves behind.

Predeceased by sister Charlotte (1937), brother Howard (Bud) (1982), husband Burton (Mac) Smith (1979), and beloved daughter Heather Doerksen (2004), she is dearly missed by her two daughters, two step-sons, her nephew and niece and their families, eight grandchildren, two step-grandchildren, eight great-grandchildren and a step-great-grandchild, her extended family, and many friends.

Peg earned her BA from UC Berkeley in 1945. Hers was the third generation of university-educated women in her family. After graduation she married Walter Ronald Burnside and emigrated with him to his native Australia, where they had daughters Barbara and Susan. In 1951 they returned to California, where daughter Heather was born. Peg moved with her daughters to Aptos in 1959 and lived in Santa Cruz County for the rest of her life.

Peg worked in the Santa Cruz County School District for more than 25 years, first as a teacher and later as a principal. In the late 1960s she began her work with special needs children and in 1971 earned her MA in Education. She continued her professional development throughout her career and became certified as a Marriage and Family Counselor.

In 1969 she was married to Mac Smith, father of Scott and Cory. Mac and Peg shared a happy life together until his death in 1979.

In the early 1980s, she joined an organization devoted to the promotion of peace, through friendship between the citizens of the US and the USSR. With her beloved companion, Al Davis, she traveled to the Soviet Union 19 times between 1983 and 1998. During that period she studied the Russian language, worked to bring ALANON to the USSR, and hosted dozens of Soviet and post-Soviet friends who came on exchanges to the USA.

An enthusiastic swimmer and tennis player—she played tennis with her friends, the “Ladies of the Court,” until she was in her late 80s—and a lover of nature, she spent many happy days at Pinecrest Lake, CA, where she had a cabin for 40 years.

A memorial service will be held at La Selva Beach Community Church, in a community she loved, on January 25, 2020 at 2 pm.

The family wishes to express gratitude for the loving care she received at Dominican Oaks in Santa Cruz, where she lived from 2011–2019, and at De un Amor in Corralitos, where she spent her final weeks. Warm thanks also to the staff at Dominican Hospital and Santa Cruz Post-Acute.

She will always be with us.