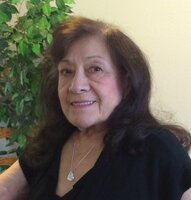 Committal Services will be held on Tuesday, November 23, in Fresno for Maria Osuna, who passed away in Santa Cruz County at 90 years old.

Born in Mercedes, Texas, Maria moved to Fresno with her family as a young girl. One of five sisters, she was raised in an agricultural environment in the San Joaquin Valley. At a very young age, Maria began working in the fields to make money for her family. Then in 1950, she married Robert F. Osuna, and the couple made their home in Fresno, where they raised their three children—Cynthia, Rene and Annette.

Maria will always be remembered as a skilled homemaker, loving mother and devoted Catholic who dedicated herself to God and her family. She had a gift of seeing God’s presence everywhere, whether in a burnt tortilla or a beautiful tree trunk. Making others laugh and telling the story of dancing with television host Mister Rogers were her favorite pastimes. But, most of all, she loved country music, dancing, collecting rocks and knick-knacks and giving to others, especially her family.

She moved to the Aptos beach area 10 years ago to be near her daughter Cynthia and her grandchildren. Maria is survived by her daughter and son-in-law, Cynthia and Nick Brautovich of Aptos and Annette Hall and Rene Osuna of Fresno. Maria’s passing leaves ten grandchildren and her sisters Nelda, Eva and Tina. She was preceded in death by her sister Esther and former husband, Robert.

Family and friends are invited to gather on Tuesday, November 23, at Belmont Memorial Park Cemetery in Fresno, beginning at 1:30 p.m., where a Catholic Burial Ceremony will commence.