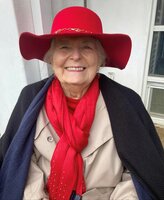 Early on Monday morning, May 23, 2022, Matushka Genevieve Glagolev (known to her friends as Gerry; Evgenia in baptism), widow of the late Archpriest Sergei Glagolev, fell asleep in the Lord at the age of 98.

Genevieve Brunarsky was born March 27, 1924 in Detroit, Michigan to parents who had emigrated from the Austro-Hungarian Empire, from an area that is now in Poland.  At baptism, she was given the name Evgenia.

Genevieve grew up in Detroit and was deeply connected to SS. Peter and Paul Orthodox Church (later, Cathedral).  As a little girl, one of her favorite things to do was to sneak into the wedding celebrations in the church hall with her friends.  Her mother was typically the one who did all the cooking for these events.

At school, her teachers and classmates had difficulty pronouncing what must have seemed to them to be a foreign sounding name and called her Gerry, the name by which she was known for the rest of her life.  Gerry worked as a switchboard operator and receptionist at several businesses in the Detroit area.  This valuable experience prepared her for a similar role at the OCA chancery years later.

Gerry sang in the choir at SS Peter and Paul, where she eventually met Sergei Glagolev, the young newly-appointed choral conductor.  Sergei (later, Fr. Sergei), a trained musician, worked diligently with this large and dedicated choir and developed it into one of the best church choirs in the country.  As a young, handsome choir director, Sergei surely could have had the pick of any of the eligible young ladies of the parish.  His eye fell on Gerry, who, initially, was not impressed.  Although it was not exactly love at first sight for both, their relationship developed quickly and they were engaged and married within months of their first date.  This began a truly loving and caring partnership of over 70 years.

Gerry and Sergei were married on Jan 23, 1951 at her home parish where she had enjoyed so many other wedding celebrations.  Later that year, Sergei, a seminary graduate, was ordained to the diaconate, then in 1952, to the priesthood.  As assistant pastor of the cathedral, he continued to serve as choir director until 1953, when the Glagolevs were transferred to Lorain, Ohio to succeed his newly-reposed father, who had been rector of the parish there.

Matushka Gerry considered her role as a Matushka to be a true partnership alongside her husband, Fr. Sergei.  After Lorain, they served parishes in Encino/Tarzana, California (1955-75), San Francisco, California (1975-77) and East Meadow, New York (1977-1981).  In 1981, Fr. Sergei was called to become Director of the Fellowship of Orthodox Stewards (FOS) at the OCA Chancery, a position held for five years until his retirement in 1986.  At the same time, Matushka was hired as receptionist/secretary at the Chancery.  She was entrusted also with maintaining the clergy records at the Chancery, which she did assiduously and meticulously.  For a quarter of a century, until her retirement in 2007, she was the kind and helpful voice on the phone and the face of the OCA to visitors.  Through this work, she got to know much of the clergy and their families who called or visited the Chancery.  She became for them a friendly, empathetic, albeit principled, mother figure.  A title desk plaque with the moniker “Mother Superior”, affectionately gifted to her, was prominently displayed on her desk.  She was highly respected for her personal integrity, her dignity and the professionalism of her work.  In recognition of her dedicated labors for the Church over many years, she was awarded several gramotas by the Holy Synod of Bishops, including one on the occasion of her 80th birthday.

Throughout their seven decades of marriage and service to the Church, Matushka Gerry supported Father Sergei in his parish work and his many other wide-ranging ministries in the Church.  In a letter to Mother Christophora of Holy Transfiguration Monastery in Ellwood City, Pennsylvania, she related the following thoughts about being a Matushka:

“A wise old Anglican Priest told me to work with the people, but that I should never be in charge.  I took his advice and it worked out.  For me, I was just one of the bunch but worked with the ladies.  My role turned out to be just being friendly to everyone in the parish.  I never ignored anyone.  I tried to be good to everyone even to those who were difficult, and there were many.”

When time allowed, the Glagolevs enjoyed traveling to many wondrous places, including Alaska, Russia, the Holy Land, Greece, Eastern and Western Europe, and finally, Paris, France.

Matushka Genevieve is preceded in death by her husband, Archpriest Sergei Glagolev, her brother, John Brunarsky, and her sister, Olga Brunarsky Gris.

She is survived by daughters Christia and Marina, son John (Christine) and five grandchildren.

In lieu of flowers, the Glagolev family encourages support in memory of Matushka Gerry for the three seminaries of the Orthodox Church in America:

May Matushka Gerry’s memory be eternal!