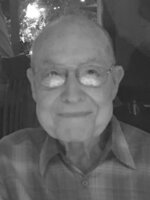 Born on October 31,1922 in Santa Ana, CA to Ben and Mary Keeler, Willard graduated from Tustin High School before volunteering for service during World War II. Trained as a Naval Aviator, he rose to the rank of Captain in the Marine Corps, training pilots in Corsair F4U fighters in Brownsville, TX.

Just before he left for basic training Willard married his high school sweetheart, Virginia Marie Riehl. During their 70 years of marriage Willard and Virginia were avid golfers, traveling companions, and gardeners.  He will also be remembered for his enthusiasm for performing odd jobs and helping to maintain not only his own home, but those of his children.

A successful businessman, Willard started and built Keeler Foods, Inc. from a one-man operation in Santa Ana to a multi-state grocery delivery business.  He was an avid fisherman, and particularly enjoyed taking his grandchildren on fishing outings.

Willard converted to Catholicism and was a devout churchgoer and church volunteer. He was generous in supporting numerous charitable causes.

A funeral service will be held at noon, October 29, at San Augustin church in Scotts Valley.  A reception will follow between 2:00 and 5pm at The Grille restaurant at DeLaveaga golf course.

Instead of flowers, please send donations to Catholic Charities USA, or Hospice of Santa Cruz.