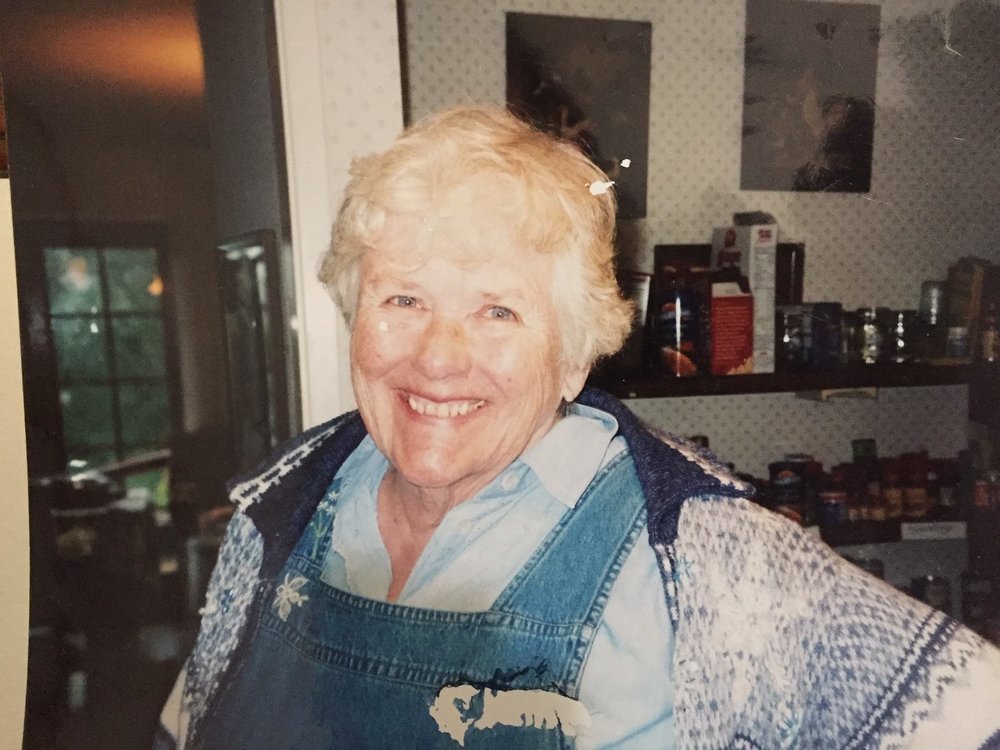 Greta was born December 9th, 1927 to Lala and Gerhard Fisher in Palo Alto, CA. She and her brother Carl led a sheltered childhood amidst the difficulties of the Great Depression.  She graduated from Palo Alto High School at age 16, and Stanford University at age 20.

Greta studied geology at Stanford, part of a lifelong interest in the sciences including astronomy and physics.  While an undergraduate, she met a handsome teaching assistant in her mineralogy lab, George MacLeod.  She and George married and eventually settled in the “hinterlands” of Los Altos Hills where they raised 4 children.

Although Greta knew nothing of country life, and little about cooking when she married, she became a master of both.  She created nightly feasts from the garden’s bounty including award-winning pies, cookies, jams and preserves, and home processed honey.

Greta was a wonderful mother.  Her patience and creativity were two of her defining traits.  She made sure her children knew how to write reports, sew, bake, and express themselves through music, art, and poetry.  No project was too messy, no instrument too loud… she was tireless in her support of her children’s well-being and happiness.

When her own children were grown, Greta found the time to develop her talent as an artist and teacher.  In 1973 she earned a teaching credential from San Jose State and worked as a special education teacher before finding her calling in the creation of stained glass windows.  Several of her windows can be found in the chapel at Christ Church in Los Altos Hills and St. Columba’s in Inverness, CA (see image).  Later in life Greta struggled with chronic pain that left her unable to do her glasswork, but she continued to enjoy painting and drawing.  She always made sure that her grandchildren were well supplied with art supplies and books for college.

Much of Greta’s life was spent being the “wingman” for her husband, George’s wild ideas and boundless energy.  Together in 1976 they moved from Los Altos Hills to a 50-acre ranch in the Sonoma Valley where they planted grapes and apples, made wine and apple juice, and entertained a constant flow of children, grandchildren, and friends. Greta was always ready to read a book or play a board game with a child, or pull one of her famous apple pies from the freezer for a surprise guest.

Two of Greta’s favorite places were Carmel-by-the-Sea and Fallen Leaf Lake in the Sierra Nevada.  Greta’s parents built a small house overlooking Point Lobos in Carmel Meadows in 1963, which Greta inherited and kept as her artist’s retreat from George’s workaholic lifestyle.  It is a still place of peace and creativity for the whole family.  Trips to Fallen Leaf Lake began early in the family’s life with vacations to Stanford Sierra Camp.  Later, the family opted to go to Fallen Leaf Lodge and camp along side of Glen Alpine Creek or at the small cabin behind the chapel, Eagle’s Eerie. With George in charge of all camp cooking, Greta was free to hike her favorite trails in Desolation Valley, including the Tamarack Trail and the PCT to Susie Lake.

Her husband of almost 70 years, George MacLeod, and her beloved brother, Carl Fisher, preceded Greta in death.  She is survived by her four children and their spouses, 7 grandchildren, and 5 great grandchildren.  A memorial service will be held at St. Patrick’s Episcopal Church in Kenwood CA on May 29th at 11:00.

To send flowers to the family or plant a tree in memory of Ann MacLeod, please visit Tribute Store
Print
Wednesday
29
May