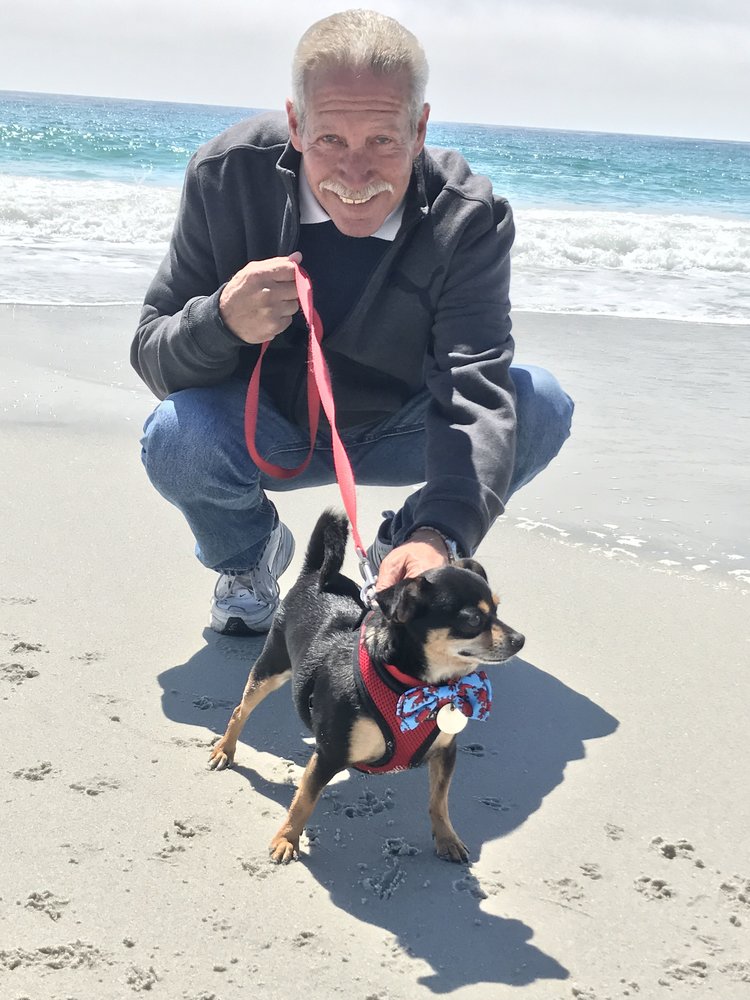 Jim Rock Riccabona, 67, passed away peacefully on May 16, 2019 with his partner, his daughter, and his loving service dog, Rocky, at his side. Jim was born in Long Island, New York, and he graduated from Bay Shore High School in 1969. After a brief stint in college on a track scholarship, Jim enlisted in the Air Force, and he spent the following nine years serving the United States. His first assignment took him to Brindisi, Italy, where he worked as a Russian translator, and after returning to the United States, he served as an air traffic controller.

In 1989, Jim, his wife Suzy—who preceded him in death—and his daughter, Kristin, moved to Santa Cruz from Fort Lauderdale, Florida. After this move, Jim embarked on a career as a 9-1-1 dispatcher. For the next 25 years, Jim was known locally as “Rock,” a prominent voice from the 9-1-1 center. That special voice of his was often recognized throughout Santa Cruz county, and he always supported our law enforcement and emergency personnel. All the way to the end, sports was number one in Jim’s world, and he remained a loyal fan of the New York Yankees. In addition to watching golf, basketball, and football, he was a stickler for details, even calling a local TV station to instruct the new sportscaster in how to report scores correctly.

On a stormy night in 2008, Jim met Dee Dee, his wife and partner, and they quickly began their life together. Retiring in 2013, they had many adventures together, including trips to Boulder, Colorado, where his daughter resided, Honolulu, Hawaii, where his daughter was working on her PhD, and Elkton, Oregon, the vacation home of his sister, Valerie. They also enjoyed celebrating the holidays together and spending time with friends and family.

Jim is survived by his partner, Dee Dee Riccabona, his daughter, Kristin Rock, and his son-in-law, Brian McKee. He also leaves behind Dee Dee’s son, Charlie Gilbert, and his wife, Laura Palmer, as well as Dee Dee’s daughter, Steph Taylor, and his “adopted” grandchildren. In addition, Jim is survived by his sister Valerie Edrington, her husband Gene, his brother Robert Rock and his wife Colleen Rock, several nephews and their families. Jim was preceded in death by his parents, Kristin’s mom Suzy Rock (Rogers), and his sister Maureen Dunphy Laurenzi.

A graveside service will be held at Holy Cross Cemetery on 7th Avenue on Thursday, June 6th at 11:00am with reception to follow. The family would like to thank Dr. Wong, the wonderful staff who treated him during his two-and-a-half-year battle with cancer, and the Hospice team of Erica, Gina, and Gloria. In lieu of flowers, donations in his name may be sent to the Santa Cruz County Animal Shelter, 1001 Rodriguez Street, Santa Cruz, CA 95062.

To send flowers to the family or plant a tree in memory of James Riccabona, please visit Tribute Store
Thursday
6
June