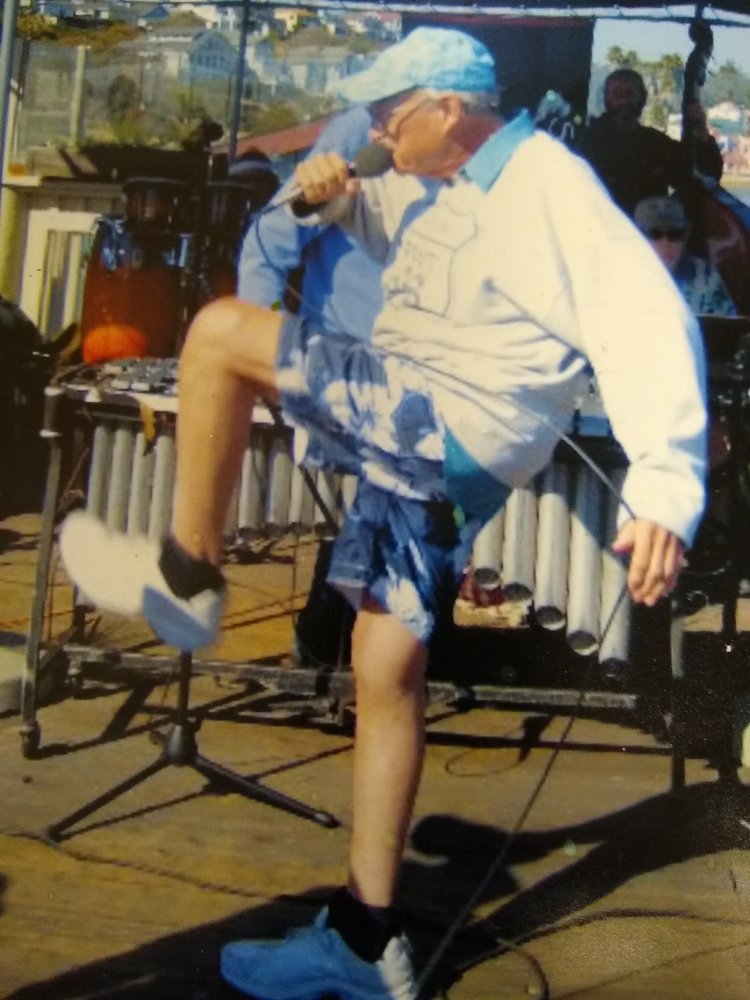 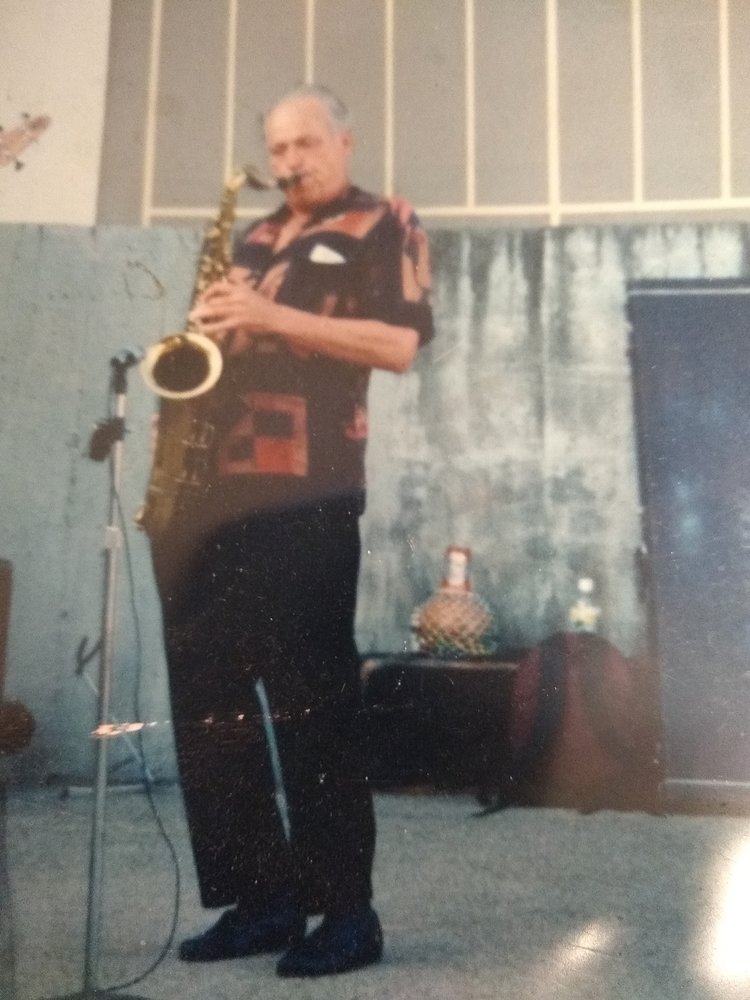 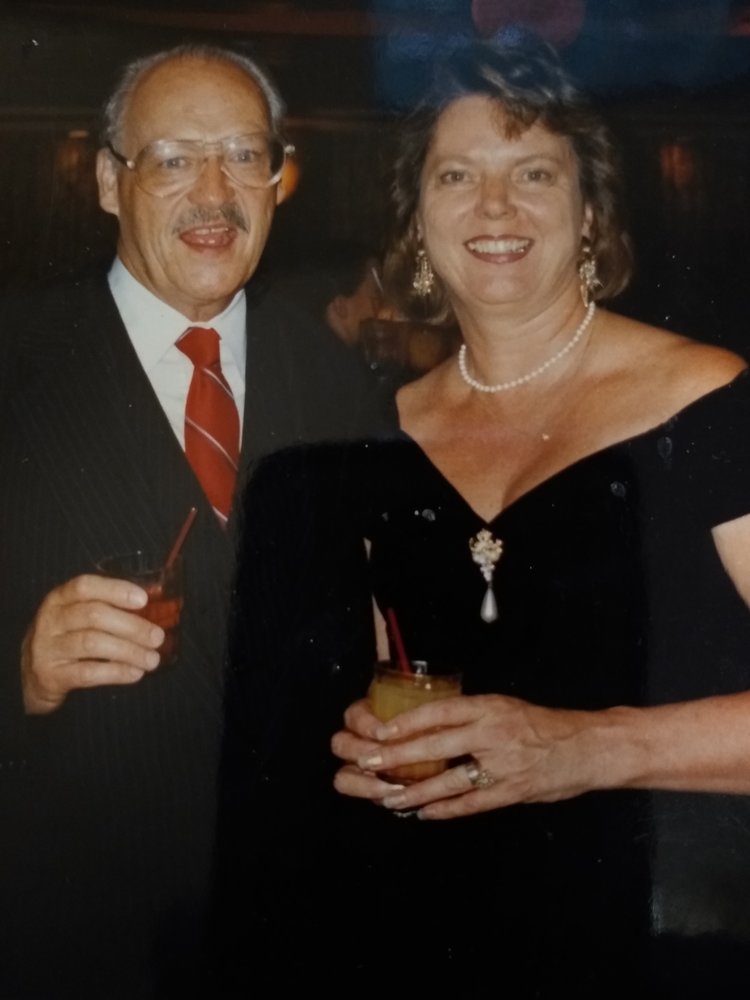 Beloved local jazz musician Harry Woodward , 86, is finally playing in the “Big Room” with the greats. He passed quietly in his sleep Friday morning, July 19th.  When he experienced a close call some years ago, he heard Louis, Ella, Prez, Bird and Lady Day and more jamming in the Big Room but he was told it wasn’t time for him to go in yet. He has remained excited about playing in the Big Room ever since.

Harry was born in Des Moines, Iowa to Wm John Woodward and Marcella Valerian Garrison Woodward, and raised in Minnesota on the heels of the depression. He was an Eagle Scout. His mother wanted him to be an engineer. He attended exclusive Blake School on scholarship, then was offered admission to MIT, Harvard, and Cornell to become an Engineer. But by then he had had an opportunity to fall in love with jazz, and he loved writing. So he chose the Univ. of Minnesota and rec’d a BA degree in English Lit.

It was 1955, a peaceful time between wars. He joined the Army, married Carolyn Ann Blair, and they enjoyed being stationed in Germany.  He served In the Counterintelligence Corps and rec’d an honorable discharge.

When back in the States, Harry decided he had had enough of Minnesota winters and they  decided to move to California. They stayed with friends for awhile, became real hippies, dancing around the maypole wearing nothing but smiles and flower garlands.  Harry worked in Hollywood, writing a few jokes for the Smothers Brothers and Jonathan Winters. Harry was the staff writer for Urie & Assoc.  and got to be Gregory Peck’s stand-in while filming a documentary for the Eleanor Roosevelt Cancer Foundation. Harry noted that Mr. Peck was as fine a man as those he portrayed on-screen.

The biggest project they worked on was a 90-min special for ABC. Harry helped create a musical biography, a documentary about JFK called Young Man From Boston. It received such glowing reviews that it was picked up for syndication and ran nationally for several years.

Harry’s most notable role while working for Urie, was as the voice of the big guy in the Hawaiian Punch commercial that answered “SURE” when offered some punch.

Harry’s music career started when he moved to Santa Cruz in 1972, and he stood for hours, transported listening to Warmth at the Cooper House, the iconic scene of Santa Cruz culture. He sat in on vocals and stayed with Don McCaslin’s Warmth and Jazz Geezers for over 45 years on saxophone and mellow bass voice.  They also produced a Bebop Drama THE NAZ where Harry played the role of Jumpin’ John the Baptist, performed at Kuumbwa Jazz Center. Harry wrote 50-60 articles for local papers including The Good Times where he served as Music Editor for one year. Harry sang with the Cabrillo Symphonic Choir and was an original member of the Inner Light Ministries choir led by Valerie Joi Fiddmont.

Harry was Santa at the Mall for years, and also performed weddings as Reverend Harry.

When singing and playing Jazz, Harry loved seeing people dance to the music (“We’re playing the same tune, but everyone moves to it their own way”).  Harry always loved theme and variations, whether it was flowers, cats, butterflies, or especially people. He loved all varieties of people.

Harry loved God, life, joy, and colorful characters. His sense of humor was known to all and he felt humor was “the shock absorber for the bumpy road of life” and without it, we lose perspective.  He managed to keep a twinkle in his eye in spite of adversities. He was known as a kind and merry soul.  Being a loving and gracious man, he was much loved in return .

Harry was the joyful companion of 25 years of Nancy Forsberg,  and leaves behind a loving church family at Inner Light Ministries and his family of wonderful staff and residents at Santa Cruz Post Acute Care where he had an active social life and loved singing Karaoke to the residents.  His only brother Wm Garrison Woodward preceded him in death in 2005. His ex-wife Carolyn and Harry have remained friends.

Harry’s vast LP collection will be available as mementos after the Celebration of Life on Aug 10that Noon.

To send flowers to the family or plant a tree in memory of Wallace Woodward, please visit Tribute Store
Saturday
10
August

Share Your Memory of
Wallace
Upload Your Memory View All Memories
Be the first to upload a memory!
Share A Memory
Send Flowers