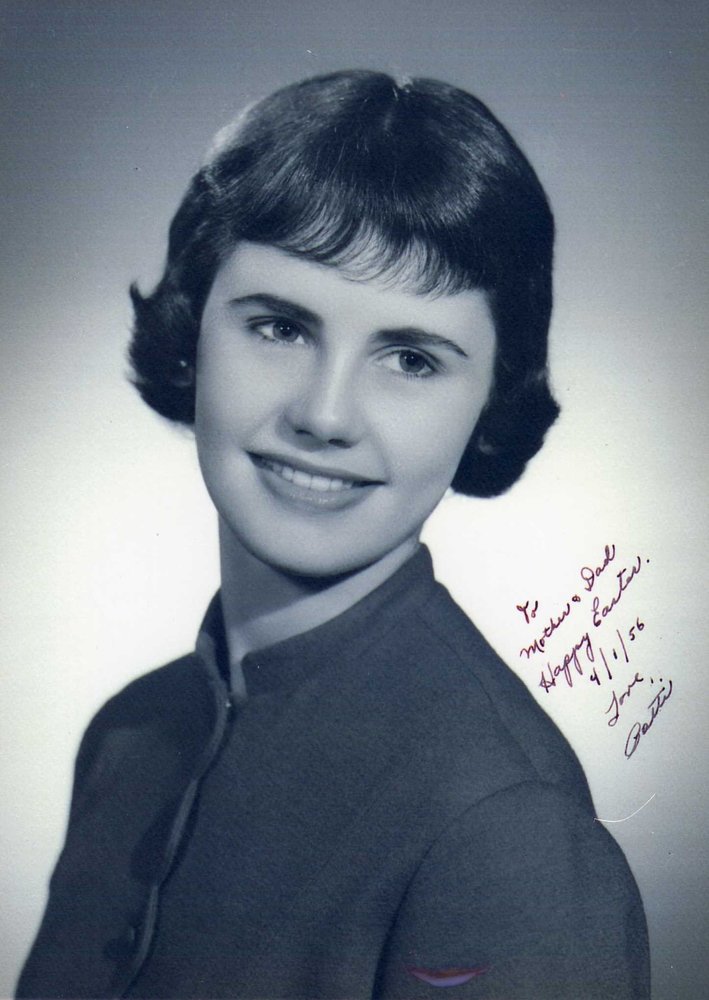 Patricia “Patti” Loretta Corrigan Boudreau of Cupertino, California, passed away peacefully at the Westwind Memory Care in Santa Cruz, California in the presence of her loving and devoted family.  Patti was born in Pittsburgh, Pennsylvania, and was the second child of James Corrigan, DDS, a prominent local dentist and Rita Mary Grimes Corrigan of Crafton, Pennsylvania.  After years in the Crafton community, she moved on to Mercyhurst College in Erie Pennsylvania where she met her husband of many years Jerauld F. Boudreau (of Niagara Falls, NY).  They had a long and storied marriage which began on January 25th of 1958 and ended with Jerry passing on February 4th, 2011. During the 55 years she lived in Northern California mostly in the town of Cupertino.  Her family flourished and is survived by her four children:  Michael “Mike” Boudreau along with his wife Judi, Suzanne Boudreau Ebrahimian along with her husband Mike, Marlene Boudreau, and Corinne Boudreau Turner.  She had eleven wonderful grandchildren and four amazing great-grandchildren that will provide branches of ancestry that will sprout benefits for humanity for many years in the future.

Patti’s long life was highlighted by her ability in her early teenage years to have expressed her love of music and to interact with her great singing voice.  This would provide for family members and friends a pleasurable entertainment experience that brought enrichment to their musical souls.  Her goal at that time was to become a light opera singer.  To fulfill this opportunity, her Dad and Mom afforded her the chance to attend the all-women’s Mercyhurst Catholic College in Erie, Pennsylvania.  But as life usually does provide twists and turns that turn in to unintended circumstances, she met the love of her life, Jerauld “Jerry” Boudreau at a dance that she attended at the all-male Gannon Catholic College.  Jerry was there on a basketball scholarship, and as Patti would always say it was love at first sight.  They were eventually married, and from there they began their pathway into the future together.

After a few stationary years living in the Niagara Falls, New York, there were three new family additions born locally: Mike, Suzanne, and Marlene.  Patti maintained the busy household while Jerry began teaching in the surrounding area.  Niagara Falls is a beautiful place, but it was not going to be their long-term home.  Their biggest concern was the family’s quality of life and the very difficult winter weather that Niagara Falls graciously provided each year.  Like many of their generation, they were intrigued by new California “Golden State Prosperity”.  In 1964, they made the big move packing up their belongings into a station wagon and a trailer…heading west.  First checking out Arizona, and then into Southern California, but finally settling in Northern California and the Santa Clara Valley.   The beautiful weather and the expanded job market were a great option for an emerging family. Jerry was the first to find a teaching job, and that left Patti with her hands full as a full-time mom.  They were blessed again with another family member Corinne in 1965.  The first California native born into the family.

As a mother of four active children, Jerry and she found a three-bedroom house in the town of Cupertino.  At that time a residential enclave of Lockheed engineers and professionals that would eventually house a little company called Apple.  Life was good but challenging with her four kids, and even with the time constraints, Patti needed more in her life.  She was a pioneer of many professional women today when she took on the challenge to go back to school in 1970s.   Her goal was to finish what she had left behind in Erie year’s before. Working on her schoolwork early in the morning and attending nighttime classes, she finished her college education at San Jose State.  Earning a degree to become an elementary teacher. Once her certificate was in hand, she secured a job in the Mountain View school district alongside Jerry.   To the delight of many children for years within her classes, she helped guide them through their early formative elementary years and setting a teacher standard followed today by her daughter Suzanne and her grand-daughter Danielle…both teachers.

As her family and professional life grew through the years, the trials and tribulations of life followed, but at the heart of it all was the true love that ran through her and her family as they changed and grew.  Over the year’s her children became parent’s and grandchildren.  They filled her and Jerry’s life with happiness.  Patti continued to teach up until a time that she couldn’t continue, but she left teaching fulfilled with a sense of accomplishment.  She moved on to continue to be a loving mother, grandmother, and more recently a great-grandmother.  Adding, her beloved dog Ginger Cake to her life recently.  Patti had a great life, and it was grand production.  Patti Boudreau came into this world and her passion for life left it an improved place.  Her family, friends, and acquaintances benefitted from interacting within her life every day.  She will be truly missed, and she will be forever loved.

To send flowers to the family or plant a tree in memory of Patricia Corrigan-Boudreau, please visit Tribute Store
Print
Saturday
5
October