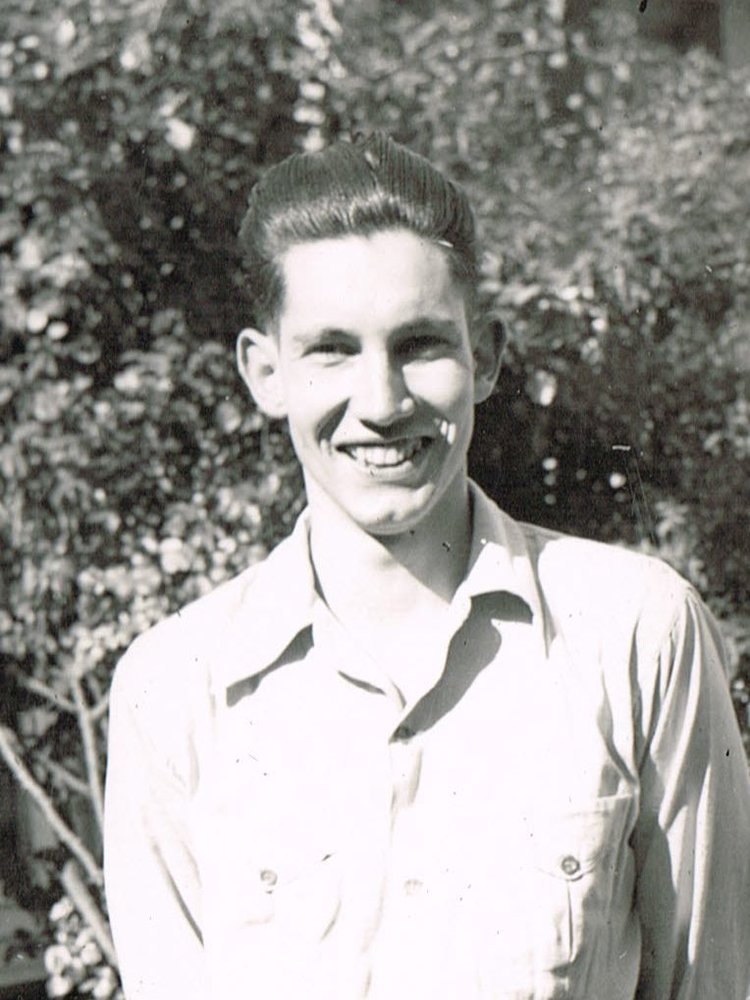 Norman Andrew Bonner passed away after a very short illness following a stroke on March 27, 2019 at the age of 98 1/2 at Sunshine Villa in Santa Cruz.

Born in San Francisco on August 3, 1920,  the only child of Alfred William Bonner from Belfast, Ireland and Nathalia Marie Lundstrom from Oakville. He grew up on the steep streets of the upper Mission District, in a house on the corner of Cumberland and Sanchez Streets overlooking the City. His mother’s parents, an aunt and a cousin lived across the street. The rest of his extended family also all lived in the City. In 1892, at the age of four, his father came from Ireland aboard the SS Labrador with his parents and siblings, and was a member of the original Teamsters Union, owning and driving a horse drawn laundry wagon in the City with HIS father, before the ’06 earthquake. Later on he became a talented mechanic and carpenter). Norman’s mother was one of the first female bookkeepers in the Bay Area, working for a shipping company in Oakland. Norman’s maternal grandfather Ivar Lundstrom sailed from Norway in 1879 and started Oakville Cooperage where he made oak wine barrels for Napa Valley wineries before moving the family to San Francisco in 1911. (In those days Norwegians’ last names were from their fathers’ names, so when Ivar arrived in San Francisco he saw an ad for Lundstrom hats and he chose that as his new American last name). Normal’s maternal grandmother (also Nathalia) sailed as a young girl with her mother and step-father and younger sister from Sweden, arriving in the Sandwich Island (now Hawaii) early in 1881, on a barque called The Beta, a six month journey,  taking the dangerous Straits of Magellan shortcut on Christmas Eve 1880. They went there to work as indentured servants on Hitchcock’s sugar cane plantation in Hilo. Four years later, following a strike by the Scandinavian workers, they gained their early release and sailed on to California, where they lived for the rest of their lives.

Norman graduated from Lick-Wilmerding High School in 1937 and went on to receive his BS in Chemistry in 1942 from UC Berkeley (where he met his beloved wife of 63 years, Adela Hurni, who grew up in Hughson, California). Norman received his BS in 1944 and his PhD in Chemistry from Princeton in the spring of 1945. He was immediately hired to work for the secret Manhattan Project in Los Alamos, where Adela soon joined him. World War II ended just a few moths later, and they were married in Santa Fe on September 8, 1945.  They stayed in Los Alamos for the next few years, then Norman taught at Washington University in St Louis where their daughter was born, and at Cornell University in Ithaca, New York. Finally, in 1953, driven to return home to California by the extreme seasons back east, they settled in Livermore where Norman spent the rest of his career as a research scientist at Lawrence Livermore (Radiation) Laboratory. He started as a radio chemist and later became an analytical chemist, starting out in shot diagnostics. He later became acting head of radiochemistry, but soon decided that he didn’t like administrative work and moved to Z-Division for three years. In 1969 got into environmental studies, and his final area of work was as coordinator for trace element analysis for the Imperial Valley geothermal energy project. He once said that environmental work could be frustrating because “You’re looking for effects you don’t want to learn exist”. Norman continued working at the Lab on into his 80’s.

He and Adela both went back to school in the mid- 1970’s and earned their licenses as marriage and family counselors. They spent many years working together as a team with their own counseling practice.

Norman started hiking in Yosemite Valley with his parents as a small boy, making it to the top of Vernal Falls on the shoulders of his father at the age of five, and making his last hike up that trail 91 years later.  He climbed Half Dome with his uncle and visited many of the peaks in the High Sierra in the intervening years.  His love of the Sierras stayed with him his entire life. Every year that they were in California, Norman and Adela would make at least two trips to Yosemite Valley and Tuolumne Meadows, and two years in a row,  in the mid ’50’s under the auspices of the Sierra Club, they took a burro and their young daughter and hiked the High Camp circuit, following in the footsteps of a packer named Tom and his  pack mules who were  supplying the camps for the summer. Norman was a dedicated member of the local Hill Hikers group who made it their goal to find a weekly hike with the most change in elevation, enjoying all of the challenging hiking trails around Livermore Valley and beyond. As he got older and a bit slower, one of his favorite places to hike was on the trails of Del Valle. But his hiking friends said they didn’t tailor their hikes to him, and he always kept up. (Although he said that he and Shirley slowly worked their way down the ranks from the “Scramblers” to the “Ramblers” to the “Amblers”).

Norman and Adela travelled the world, including many trips to Europe, Tahiti and the Hawaiian Islands, both together and also on their own. In his long lifetime Norman travelled from the top of the world to the bottom… to the Arctic Circle near Svalbard Norway and to Patagonia near the Antarctic. He hiked  the Annapurna Sanctuary trek in the Himalayas in Nepal with his daughter Eleanor and son-in-law Richard Anderson (where they became known as the “Burpas” by the Sherpas who led the trek). He and Richard, led by Lhakpa Sherpa and Phurba Sherpa, climbed to 15,000 out of the Sanctuary camp in order to make it higher than anywhere in the continental US.

Following Adela’s devastating death from complications from dementia in 2008, Norman and long-time friend, Shirley Miramontes Brown, reconnected on a hiking trip in Tuolumne Meadows , and went on to spend the remaining 11 years of Norman’s life very happily together.  They always claimed that each had saved the other’s life by being there at just the right time, as Shirley’s son had also died within months of Adela’s passing. Shirley was a lovely addition to the family, bringing her large, delightful family into the fold with her. Norman and Shirley travelled through the Panama Canal, and to both the Arctic and the Sea of Cortez together to see the whales, and it was with Shirley and a group of their Hill Hiker friends that Norman celebrated his 89th birthday hiking in the Swiss Alps. And every summer they continued to return to Yosemite and Tuolumne Meadows together.

Norman and Shirley moved to Sunshine Villa in 2017 to be closer to both of their families. Norman was proud to have learned to drive on the streets and hills of San Francisco in a 1932 Oakland without synchromesh, and was really tickled that his drivers license was good until he was 101, but he gave up driving when they got to Santa Cruz and he was faced with the street traffic here.

The words most often used to describe Norman by both family members and by all who have written and called since his death, whether folks who had just met him or folks who had known him their entire lives, were “brilliant, kind, gentle, funny and fair”. He had a great sense of humor, he made a mean pot of coffee (you always knew if he was happy to see you if he met you at the door with a fresh-brewed cup)…and his lemon meringue pies made from scratch were the best in the world.  But if you asked him to pass the peas, you had better have been ready to duck.

The family would like to thank, from the bottom of our hearts, Dr. Adam Yarme; all the kind and patient folks, both staff and residents,  at Sunshine Villa; the amazingly dedicated ladies from Florence Kuo’s Home Care agency and everyone from Hospice of Santa Cruz (with a special hug of gratitude to Kirstin Oehler) and another to the amazing “Four Musketeers” from the Hill Hikers, Jacky Poulsen, Nancy Rodrigue, and Werner and Sonja Schlapfer, who came to see him and lit Norman up with laughter and grins the day before he stepped onto the next trail in this circle of life).

A celebration of life will be held on October 19 at the family home in Livermore. (RSVP ihatefog@yahoo,com) Arrangements were under the care of Benito & Azzaro Pacific Gardens Chapel. To express your condolences or share a memory with Norman’s family, please visit www.pacificgardenchapel.com

In lieu of flowers contributions can be made to:         The Nature Conservancy, World Wildlife Fund, Regional Parks Foundation, Guide Dogs for the Blind, or any group close to your heart.

To send flowers to the family or plant a tree in memory of Norman Bonner, please visit Tribute Store