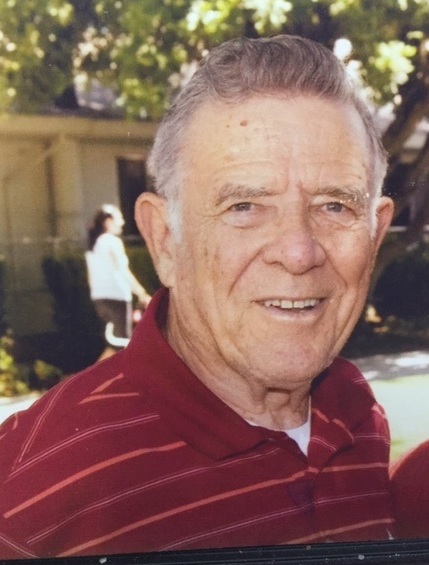 John passed away peacefully, surrounded by his loving family on Saturday morning, January 4th.  A native New Yorker, he grew up in Chester Heights, a small community in Eastchester.  He graduated from Blessed Sacrament High School, in New Rochelle, and enlisted in the Navy. He achieved the rank of First Class Petty Officer while serving as an Armament Specialist on the Aircraft Carriers, USS Oriskany and the USS Kearsarge during the Korean Conflict.

On April 20, 1953, the day after he returned to civilian life, his best friend introduced him to Gerry Fragola, who became the love of his life. A year later, on Mother’s Day, they were married at Our Lady of Perpetual Help Chapel in Pelham Manor. They flew to California the following day to start a new life in the San Fernando Valley.

John worked his way up from a tool designer at Douglas Aircraft to becoming an engineer, specializing in the “new field” of computer-aided design at Litton Industries and GTE.  Meanwhile he received an Associates degree from Valley Jr. College and a B.S. from California State University, Northridge.

John and Gerry had five children and their time was spent nurturing their brood. Camping became high on their list with vacations at the beach, the Redwoods, Yosemite and Lake Tahoe among their favorites.  In an era that had not yet discovered the value of physical fitness, John introduced his family to running.  His children remember the infamous O’Hara Running Team, with Dad’s after-work jogs from their house to the nearby high school track field. One evening his daughters decided to cut out early, and sprinted home.  A frantic John returned to the house with a shout to Gerry to “call the police; the girls were kidnapped.”  The following day they switched to morning runs.

For nearly 15 years John coached Youth Football and to many, he is still affectionately called, “Coach.”  He also coached baseball and track in Southern California.

John was a member of the Santa Cruz Cycling Club for nearly 20 years. Although he participated in many long-distance rides, including three 500 mile Cycle Oregon events and the San Luis Obispo Century, he admitted that his favorite ride was the Thursday Gzdich Pie Ride.

In 1974, John completed the Knights of Columbus-Paul Masson Marathon in Saratoga, and in the 1980’s he teamed up with daughters, Christie and Kathy to compete in the Seacliff Beach Sandman and the Santa Cruz Sentinel triathlons.

Fall would find him warming up for the Big Sur River Run, where rain or shine he jogged alongside family.  His reward was the evening campfire, s’mores and sometimes a sing-along.

His favorite race was the 10K Wharf to Wharf, where over the years he accumulated 20 racing bibs.  He was 86 years old on his final run with family and friends, and while his pace was slow, his smile was big.

John was a “ Lifetime Member” of the Knights of Columbus, and received several awards for participation.  Also a member of St. Joseph of Cupertino Holy Name Society, he was known for co-chairing their popular St. Patty’s Day parties.  A regular at Resurrection’s 10:15 Mass, he unfailingly offered prayers for the men and women of the armed forces. John never hesitated to work on church and community-oriented projects. His volunteerism was an inspiration to his family, and they followed in his footsteps.

He loved California, and especially his home overlooking Seascape Golf Course, but deep in his heart he was still that kid from Chester Heights.

He was predeceased by his parents, John James and Margaret “Mae” Walshe O’Hara, his brother Edward and wife, Florence, brother-in-law, Al Fragola (beloved brother of his wife), and nephew, Michael O’Hara (son of Raymond and Chris).

To send flowers to the family or plant a tree in memory of John O'Hara, please visit Tribute Store
Thursday
9
January