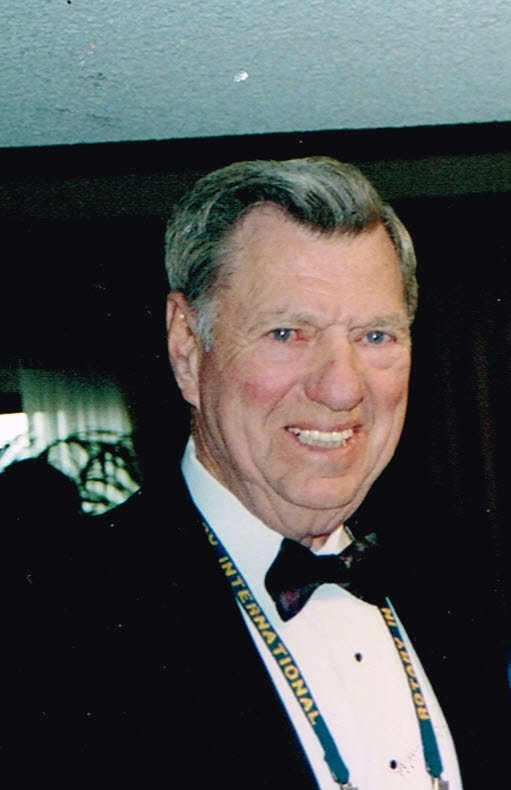 John J. Fisher, beloved father, neighbor and community leader died peacefully at home January 7, 2020 at the age of 97.  Born and raised in Bedford, Indiana, John attended Georgetown college in Kentucky before joining the Boston Hobos to play semi-professional baseball.  John served in the Navy as a Seabee in the South Pacific during World War II.  He met his wife Mary Kane in the Navy and they were married January 1, 1947 until her death in December 2010.

John retired as Operations Manager for PG&E in Santa Cruz, after a 40 year career with the company that took him all over Northern California.  John was very active in Rotary and in the local community.  A past president and member of the Aptos Chamber of Commerce, John was named “Man of the Year” in 1990.  He was also named one of the “People of the Century” for his positive impact on the community.  And in 2005 He was presented with the Lifetime Achievement Award from the Aptos Chamber.  John also served on the Executive Board of the Monterey Bay Area Boy Scouts of America since 1985.  Additionally, he served as a member of the Dominican Hospital Foundation Board.  In 2000, John was a recipient of the KSBW distinguished Jefferson Award presented to those who have exhibited outstanding service to their community as a volunteer.  He traveled to Washington, D.C. to receive this award in the chambers of the U.S. Supreme Court.

John was active in Rotary for over 60 years, serving as Club President in Cupertino (1966-67) and again for the Capitola/Aptos Club (1981-82).  In 1988-89 he was named as District Governor of Rotary District 5170. John was a founding member of the RotoCare Free Clinics, providing no-cost medical treatment to the uninsured and working poor  in the Bay Area, including Santa Cruz. RotoCare was a vision John brought to reality.  John served as an active member of the RotoCare Bay Area Board of Directors from its inception.  In 2019 he was honored with the RotoCare Lifetime Volunteer Award for his 30 years of service.

John will be missed by his family, friends and the community. He made a difference for all who knew him.  He is survived by his three children, Terry Fisher (Dianna), Tom Fisher (Debby) and Theresa; his sister Sara Kern, six grandchildren: Keith Fisher, Brian Fisher, Elizabeth Spears, Jessica Gill, Justin Gill, and Brianna Gill,  and one great grandson, Ethan Spears.

Service to be held at Resurrection Catholic Church in Aptos on Tuesday January 14, 2020 at 11:00 am