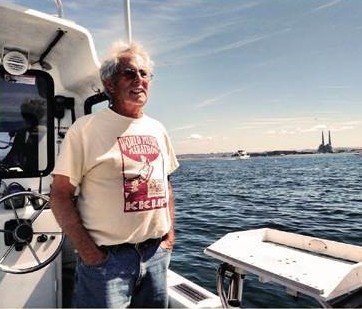 David H. Ross passed away at his Santa Cruz home on January 22, 2020, from pancreatic cancer. To commemorate his colorful life, his family, friends, and associates from many realms of his years in Santa Cruz County gathered on February 8 at UC Santa Cruz’s Cowell Hay Barn.
Born June 13, 1940, in Grand Rapids, Michigan, David was raised in Connecticut and attended Phillips Academy Andover. A graduate of Columbia University and UC Berkeley, he taught literature at Sacramento State College and the University of Hartford, Connecticut, specializing in comedy and the role of the fool in classic literature. He later earned a law degree at the University of Southern California. He practiced family law for over 25 years in Santa Cruz, being appointed attorney for children in fiercely contested custody cases, and was voted best lawyer in Santa Cruz County in the Good Times poll multiple times.
Having participated in student protests at UC Berkeley at the height of the Free Speech Movement in the 1960s, David pursued an interest in local community matters in Santa Cruz County. As a resident of Brookdale, he was elected four times to the Board of Directors of the San Lorenzo Valley Water district, serving continuously from 1988 to 2006. More recently, he volunteered as a member of the local branch of the ACLU. An active member of the recovery community, he helped many others seek sobriety. He volunteered in prisons and the jail in both legal and recovery capacities and served as President of the Board of Janus Recovery Center.
During his retirement, David indulged his love for art, music, food, cooking, and world travel. He continued his lifelong involvement with nature, fishing from his boat in Monterey Bay and near his vacation home in Zancudo, Costa Rica. He greatly enjoyed tending his own home garden and cooking delicious meals for family and friends. His commitment to organic gardening and farming was deeply appreciated by those he guided and taught as a docent at UCSC’s Farm and Center for Agroecology and Sustainable Food Systems.
David is survived by his partner Jan Freya; his brother Allen; his children, Michael, Alex, and McKenzie; and his grandchildren, Dillan, Luca, Ronin, Sawyer, and Willie. They will remember his creative approach to living and miss his presence in their lives.

To send flowers to the family or plant a tree in memory of David Ross, please visit Tribute Store