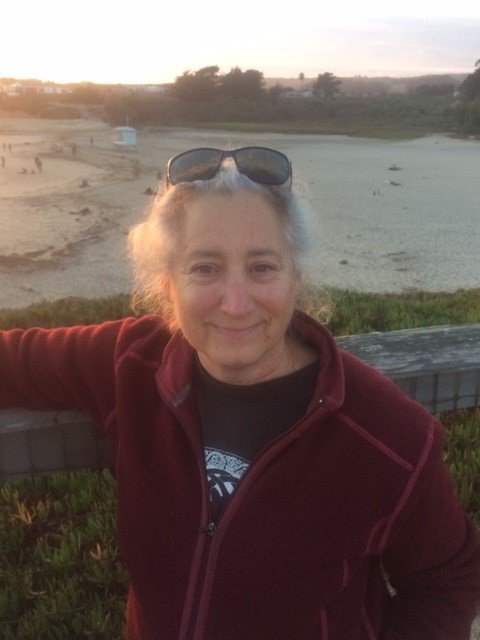 Amy Rebecca Pine was born in New York City on June 18, 1952 and died peacefully in the presence of her husband and daughter at Dominican Hospital in Santa Cruz, California, on March 22, 2020.

Amy grew up in Fair Lawn, New Jersey and went to Emerson College in Boston. She had a great spirit of adventure and was always up for any travel, any plan, any scheme. At the age of 20, feeling the tug of adventure and an interest in dance, she spent a year in Africa with her best friend, Janet, traveling to Morocco, Senegal, Togo, and Mali. Shortly thereafter she moved to Santa Cruz and settled in Boulder Creek where she and Janet ran a janitorial business for a short time. During the next few years Amy was a carpenter, fruit picker, factory worker, dancer, and yoga instructor. She decided to attend Antioch College for a degree in Clinical Psychology and Creative Arts Therapy and it was during this period that she met her husband, Bob. After receiving her degree and license to practice as a Marriage and Family Therapist she opened her private practice in Santa Cruz in 1983. In 1987 Amy collaborated with Ellen Bass to found Survivors Healing Center, a local non-profit dedicated to encouraging, supporting, and advocating for adult survivors of child sexual abuse, the first of its kind in the country. Local survivors joined with Amy to publicly tell their stories. As a result of moving past shame, a core group of courageous women survivors of child sexual abuse joined Survivors Healing Center to make it a thriving resource for both survivors seeking services and local elected officials seeking guidance on public policy. Amy continued to be active at the Center until her retirement in January of this year.

In 1988 Amy and Bob’s daughter, Lena, was born. Amy, a talented musician and composer, volunteered countless hours composing songs and organizing musicals for Lena and the other students at Santa Cruz Children’s School. She continued writing musicals for the school up until 2016. Amy remained a patron and participant in the local arts, including music, theater, and art exhibits throughout her life.

She is survived by her husband, Bob Campbell, with whom she has shared her life for 34 years, her daughter Lena Pine-Campbell, her sister, Pamela Pine, her niece, Risa, and her nephew, Maxim. She will be dearly missed by family, friends, and all those who she helped to have rich and healthy lives.

Because of the COVID-19 Virus Pandemic, memorial services will be held once public gatherings can be resumed. The family will make a public notice of those services at the time they are scheduled.

In lieu of flowers Amy’s family has requested donations be made to Survivors Healing Center, 104 Walnut Avenue, Suite 208, Santa Cruz, CA 95060 or at www.survivorshealingcenter.org .

To send flowers to the family or plant a tree in memory of Amy Pine, please visit Tribute Store

Share Your Memory of
Amy
Upload Your Memory View All Memories
Be the first to upload a memory!
Share A Memory
Send Flowers