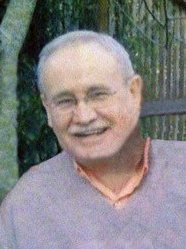 Peter Dion passed away peacefully on Tuesday, April 7 after a long battle with Alzheimer’s disease. He was at home with his wife Patty.

On June 3, 1938 Peter was born to Joseph Peter Dion II and Florence Crawford Dion in Fall River Massachusetts. He attended Durfey High School in Fall River. After graduation, he enlisted in the Air Force where he was trained as a communications specialist. He served in the newly built Cheyenne Mountain Air Force Station, a huge underground complex which was protected by the mountain into which it was built. The Cheyenne Mountain Air Force Bunker eventually became a complex missile tracking system. His next deployment was to Libya where he monitored the Libyan military’s communication.

When he returned to Fall River, MA after his service in the Air Force he married Barbara Foulds of Somerset, MA. His first job after serving in the military was as a teller in a bank. His ‘life long career’ arrived when he was offered a job in the advertising department of the Wall Street Journal.

His first child, Melanie Dion was born in Springfield, MA.

The Wall Street Journal promoted and moved him to Silver Springs, Maryland where his second child, Kellene Dion was born. While living in Silver Springs, he attended the University of Maryland. Receiving another promotion, Mr Dion was then moved to Cleveland Ohio where his son, Damian Dion, was born. In Cleveland, Mr. Dion was in charge of placing the ads in the daily papers and informing the news staff how much room they had for their stories based on the revenue of the ads.

In 1981, he and his daughter Melanie moved near Palo Alto where her father again took over the planning of the western edition of the Wall Street Journal. Because of his lifelong love of the ocean and body surfing, he eventually moved to Seacliff and commuted daily to Palo Alto.

In 1985, he met Patty Haden Stoker through a mutual acquaintance who pronounced Peter as “The last nice man in the county of Santa Cruz.” Patty and Peter were married 364 days later. Peter said, “Yes we rushed into it.” They have made their home for 33 years in Santa Cruz on a wonderful cul du sac, Oak Way, surrounded by the best neighbors in the world.

In 1988, Mr. Dion retired from the Journal and the commute to Palo Alto and began his beloved hobby of wood turning. Once a year he would invite all his friends to meet him for Art on the Wharf. He collected wood specimens and customers from all over the world.

Another of Mr. Dion’s hobbies was cooking. Patty was teaching every day, so Peter decided that he was the chef. When he found out that the lunches that he prepared for Patty were making quite a stir, he ramped up his presentation of each lunch. Several people asked if they could hire him to make their lunch, but they were informed that he was quite expensive.

Travel was another of his passions. The Dions visited Mexico, Hawaii, Yellowstone, and Horseback Beach, MA.

His greatest joy was his wonderful family including his daughters Melanie of Santa Cruz, Kellene of Fairport Ohio and his son Damian and his wife Kelly of Perry Ohio. He also enjoyed his grandchildren Tanya Sadler and her husband Mike of Coeur D’Alene, his grandson Danny Wamsher and his wife Meijing of Campbell CA., as well as Alexis and Alyssa Dion of Perry Ohio. He was graced with two great grandchildren, Samantha Hammons and Weston Sadler both of Idaho.

Peter Dion will be remembered for his vast knowledge of current events, his ability to proof read, his love of the ocean, his loyalty, his honesty, and his sparkling blue eyes.

Mr. Dion was preceded in death by his parents and one sister, Sayra Paulette Flynn. He is survived by his sister Alice Dion of Fall River and several nieces and one nephew.

He will be much missed by his family and his many friends. Because of the Covid Virus no funeral service will be held. Instead there will be a Celebration of Life for the family at a later date. The family would like to thank Heartland Hospice and Life Span who provided invaluable care and comfort throughout this journey. Dr. Karl Johsens took wonderful care of Peter during this long illness. Our special thanks go to Marla and Mica who were Peter’s caregivers to the end.

To send flowers to the family or plant a tree in memory of Peter Dion, please visit Tribute Store

Share Your Memory of
Peter
Upload Your Memory View All Memories
Be the first to upload a memory!
Share A Memory
Send Flowers