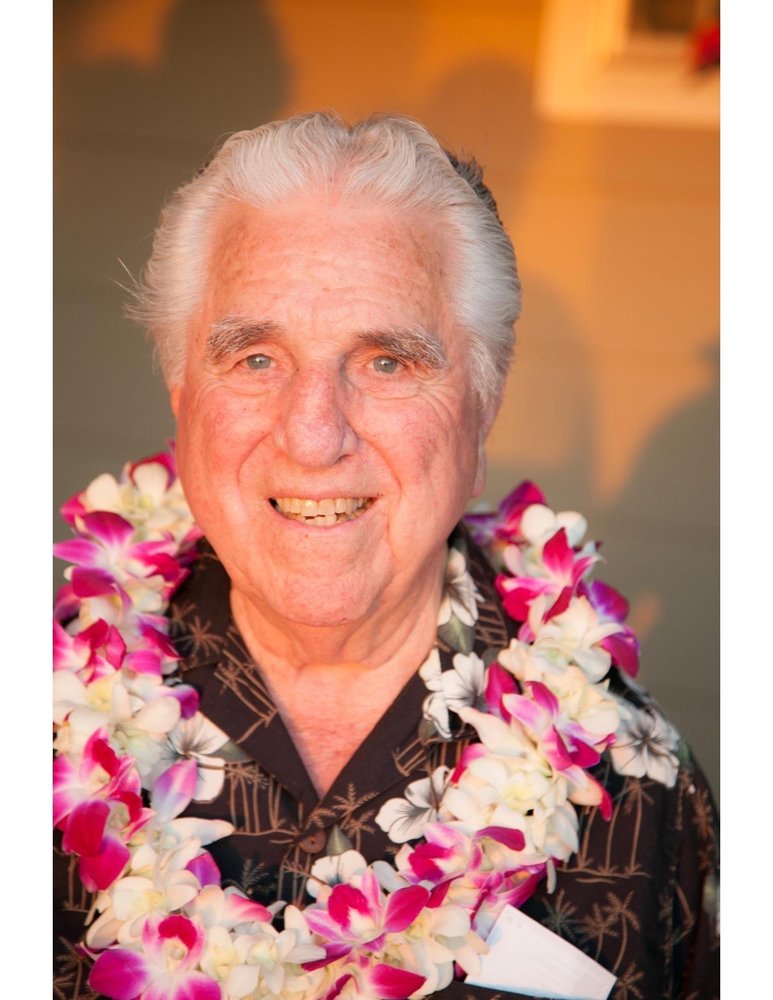 Bernie Bourriague passed away at home in Santa Cruz on April 12, 2020 with his family by his side. He was 98.

Born the tenth child of Mary and Gilbert Bourriague on February 19, 1922 in Sweet Lake, Louisiana.  As a child he moved with his family to Soquel in 1924. There Bernie attended Soquel Elementary and later attended Santa Cruz High. While at Santa Cruz High he played football, baseball and basketball and graduated as Boys Honor Student in Physical Education, class of 1940.

Bernie served in the US Army from 1943 to 1946. He was a Morse Code Radio Operator with the 1254th Combat Engineer Battalion. The Battalion was assigned to the 9th Army, crossing the Rhine River at Wessel and advanced from the Ruhr Pocket along the Rhine to the Elbe River in Germany. He earned to Battle Stars as a result of his involvement in that campaign. As the war ended he was assigned to the 3rd Army as part of the Army of Occupation until he returned home and was discharged in March of 1946.

On May 1, 1946 Bernie and his brothers, Milton and Roy opened Mission Printers where they served the printing needs of the Santa Cruz community for many years. April 22, 1950 marked the marriage of Bernie Bourriague and Marian DeMott. They were married for 57 years with four children; Jean, Robert, Christine and Linda.

Bernie was active in local sports, playing City League basketball and softball. He was also involved in youth sports as a manager for Little League Baseball. While President of the Junior Chamber of Commerce, Bernie was involved in the steering committee along with Harvey West and other city officials to purchase the land now known as Harvey West Park, the first Little League Park in Santa Cruz.  The Jaycees as there were known also raised the money and built the swimming pool at Harvey West Park. Bernie and his wife Marian were also very involved through the Junior Chamber of Commerce with the Miss California Pageant for many years.

Bernie was an active member of the Santa Cruz Elks Lodge 824. He served on the Board of Directors for 19 years and as Chairman of the Board for 15 years. He was a lodge member for 70 years.  He was also a member and past President of the Santa Cruz Host Lions Club with 63 years of perfect attendance. He was a member of Holy Cross Catholic Church where he sang in the choir for many years. Bernie was a gifted singer and sang for many weddings and participated in community musicals.

He is survived by his daughters, Norma “Jean” Travis and her husband Steven of Ben Lomond, Christine Bourriague-Smith and her husband Jeffery of Soquel and Linda Bourriague of Santa Cruz. He is also survived by 10 grandchildren, 20 great grandchildren and numerous nieces and nephews. He was preceded in death by his beloved wife Marian on March 8, 2006, his son Robert on October 9, 2012 and his nine siblings.

Bernie will be laid to rest in a private ceremony at Holy Cross Catholic Cemetery. A public memorial will be announced at a later date.

Bernie’s impact on all who knew him was large and he will be greatly missed.

To send flowers to the family or plant a tree in memory of Bernie Bourriague, please visit Tribute Store

Share Your Memory of
Bernie
Upload Your Memory View All Memories
Be the first to upload a memory!
Share A Memory
Send Flowers