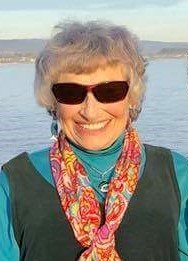 Ruth Josselyn Hall Juhl passed away at the age of 94 on Apr. 17, 2020, at her home in Aptos, CA. She was born June 14, 1925 in Oakland CA, to Leslie Standish and Geraldine (Bohannon) Hall. She was the eldest of three siblings, brother John and sister Emily. Ruth graduated from Berkeley High School in 1943, and from the University of California at Berkeley with a Bachelor of Arts degree in Interior Design in 1947. She was married to John Paul Juhl on June 29, 1947, in Berkeley, CA. She bore and raised four sons: David Paul Juhl, Richard Standish Juhl, John Jeppe Juhl, and James Leslie Juhl. Ruth lived in the state of California for her entire life. Since her husband, a high school teacher and coach, moved from school to school early in his career, the young family lived in several places: Santa Cruz, Oakland, Hughson, Porterville, Lodi, finally settling in San Jose in 1959, where her husband got a teaching and coaching job at Los Gatos High School, where he stayed until retirement in 1986. During the years in San Jose, Ruth went back to school at California State University, San Jose, earned an elementary school teaching certificate, then taught elementary school in Campbell, CA for 14 years. She was also active in several ministries, among them: Friends Outside, a ministry to families of prisoners, Women Aglow, Camp Farthest Out, and was active in the life of her church, while lovingly, diligently raising her family. In 1984, Ruth and her husband built and moved to their final earthly home in Aptos, CA, where she lived until the day of her death. Ruth was preceded in death by her parents, her brother, her sister, her husband and her son, James. She is survived by her sons David (Catherine), Richard, John (Christine), eleven grandchildren, three great-grandchildren, a sister-in-law, many nieces and nephews, and many friends, including the members of her church, Calvary Chapel of Aptos. Ruth loved and served her Lord and Savior Jesus Christ and was always ready to share the Gospel whenever and wherever she was. Now she lives in peace in her eternal heavenly home. In Lieu of flowers, donations can be made to Calvary Chapel of Aptos, 8065 Valencia St.

To send flowers to the family or plant a tree in memory of Ruth Hall Juhl, please visit Tribute Store

Share Your Memory of
Ruth
Upload Your Memory View All Memories
Be the first to upload a memory!
Share A Memory
Send Flowers