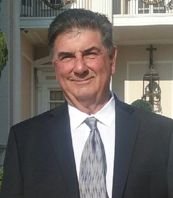 Geno Toste passed away on April 17 at Dominican Hospital with his loved ones at his bedside, following a courageous yearlong battle he fought against a glioblastoma. He would have celebrated his 70th birthday at the end of this month.  Born in San Jose, he lived his childhood in Lake Tahoe and graduated from South Lake Tahoe High School. Moving to Santa Cruz he became a devoted employee and friend of the Iuliano  Family, whose Kentucky Fried Chicken on 41rst Ave he managed for many years. Geno later worked for Santa Cruz County General Services as supervisor of the purchasing department, where he leaves many close friends and co-workers. Geno then began his career in landscape design and maintenance that spanned over 50 years.  He continued to manage Geno’s Landscape with the assistance of his family up until his final days, and his loyalty to his client’s and crew never wavered.

Geno’s devotion to his family was paramount in his life. He truly felt blessed to have his loving wife and two sons accompany him through his life journey. For more than 20 years, Geno coached his son’s, their schoolmates and friends in numerous youth sports including Boy’s and Girls Club of Santa Cruz, Little League, and several intramural and club basketball leagues. The pride he had for his son’s was never hidden, and Geno will always be remembered as a dedicated father and husband.  His beloved wife, Mary was his rock, and together they shared life’s goodness.  In addition to coaching the youth of Santa Cruz, he was also a talented athlete.  Geno led the Coor’s sponsored professional fast pitch softball team to the 1991 U.S. ASA National Championships. Always a team player, he was an extraordinary pitcher. Nicknamed “Mean Gene the Pitching Machine” his dugout would cheer as he routinely completed no-hitters; throwing a softball underhand at speeds of 80 to 90 miles per hour.

If Geno was your friend, then he was your friend for life.  His smile and jovial personality immediately put you at ease, as he solved problems, helped friends with projects large and small, and gave his time generously to just about everyone he met.

Geno was also a much-loved member of Native Sons of the Golden West.  He loved going on long rides with his motorcycle friends, and enjoyed working on and collecting classic cars.

He leaves his wife Mary Toste, his two sons; Tony and Jerry Toste, his brother and sister-in-law, Gerald and Robin Toste, his godson, Richard Esmond; his uncle, Johnny Culp, his loving nephew and nieces, along with many loving cousins, extended family, and friends.

A Mass of Christian Burial was held privately at Holy Cross Church.  A public memorial celebration and funeral will be announced after we are allowed to gather.

A kind act of charity in Geno’s memory can be made to ASPCA Humane Society or to Native Sons of the Golden West Cleft Palate Fund.

To send flowers to the family or plant a tree in memory of Gene Toste, please visit Tribute Store