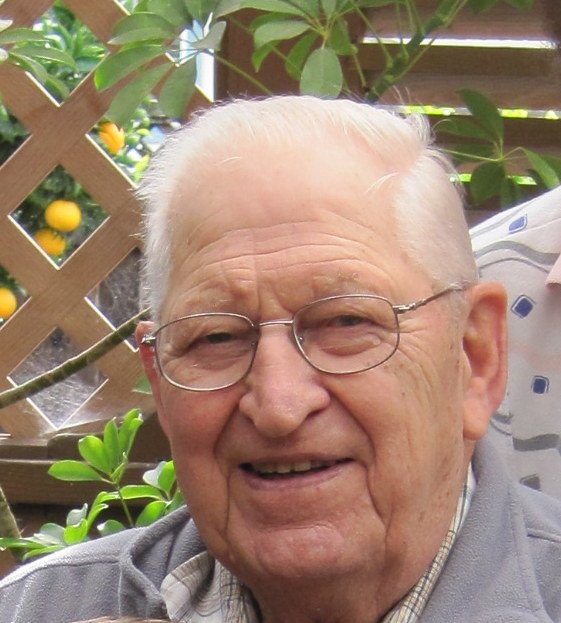 Soquel resident Kenneth Leroy Waldvogel passed away peacefully the evening of June 15, 2020, in the home he built in 1960 with his wife Kay at his side.  Ken was born September 8, 1925, to Gottlieb Waldvogel and Amanda (Gehrke) Waldvogel in Cicero, Illinois, the youngest of their 5 children.

Graduating from J. Sterling Morton East High School in Cicero in January 1944, Ken entered the U.S. Army Air Force February 20, 1944, with hopes of being a pilot, but the winding down of WWII stopped pilot training and he was discharged in October 1945.

Working for 3 years as an insurance underwriter in Chicago, Ken met the love of his life, Catherine (Kay) Fitz, they were married on February 7, 1948, and they were blessed with a marriage of 72 years.

Moving to Santa Cruz County in 1951 with their daughter Jeanne, Ken ran “Waldvogel Mushrooms” with Kay’s brother George Fitz until 1959.  From then on Ken was “a carpenter by trade”.  In 1959 Ken designed and built their home in Soquel, taking a year to complete working after work and weekends. Ken was always proud of his later position as superintendent for 8 years with Carl N. Swenson Co. on many large projects in Santa Cruz and surrounding counties,  Santa Cruz Co. Jail and Dominican Hospital addition to name a few, retiring in 1987.  Ken and Kay spent many fun times with the River Rigs RV group, and trips with dear friends.

Over the years Ken volunteered in the community as a fireman for Soquel Fire Dept., Santa Cruz Co. Special Olympics and Lions Club. An active member of St. Joseph’s Catholic Church, Ken was an usher and helped with many parish construction and maintenance projects.  A Past President of the Italian Catholic Federation Branch #227, you would find Ken working the barbeque for many club picnics and helping cook for the Lenten fish dinners.

Sadly we will not be able to have the celebration of life we had hoped for due to COVID-19 restrictions.  Memorial donations can be made to The Karen Waldvogel Family Endowed Scholarship, Cabrillo College Foundation 6500 Soquel Drive. Aptos, CA 95003 ~ 831-479-6338 https://foundation.cabrillo.edu/donate/or a charity of your choice.

To send flowers to the family or plant a tree in memory of Kenneth Waldvogel, please visit Tribute Store