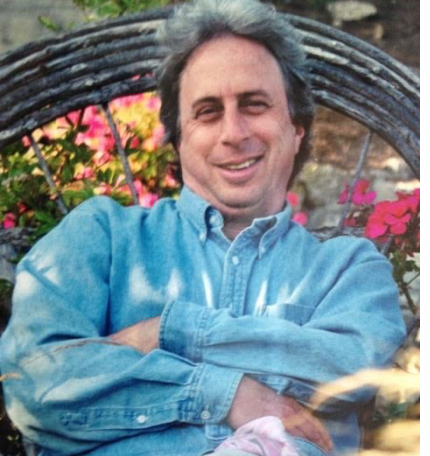 Geoffrey Gilbert was born on December 12, 1952 in New York City to Lee and Daniel Gilbert. He grew up in Fort Lee, NJ and attended Fort Lee High School, where he played on the basketball team and ran track. He was also a member of the Honor Society.

Geoffrey attended Cabrillo College and UCSC, where he co-hosted a radio show, Sports Rap, on KZSC with his younger brother, Paul, and they co-taught a Sociology Class, Sports in Society. Along with Paul and his youngest brother, Brad, he worked at their parent’s private nursery school and kindergarten back east during the summers, where he was adored by the children.

Geoffrey lived on West Cliff Drive for 15 years and said he never had a better neighbor than the Pacific Ocean. He met his the love of his life, Allison Pokras, in 1979 and they later moved to Hermosa Beach in Los Angeles where he became a television writer. Geoffrey and Allison married in 1988, had their son, Jason, in 1994 and daughter, Aimee, in 1997. They returned to Santa Cruz in 1999.

Geoffrey loved being a father and was very proud of each of his children, attending all their school and sporting events, and coaching their baseball, softball and basketball teams. Family was everything to Geoffrey and Jason and Aimee’s happiness and well-being were paramount to his life. He also adored his two Golden Retrievers, Friday and Summer.

Geoffrey loved sports, especially basketball, and was a regular contributor to the NY Post’s NBA columns and was a researcher for NBC Sports NBA telecasts. He co-hosted a radio sports call-in show on KMFO with his good friend, Jerry Hoffman, and started writing a blog, Sunrise Santa Cruz, in 2006, where he showcased his photography, family news, and sports and political commentary. And he was proud of the fact that he played basketball every day until age 63.

Geoffrey possessed a sharp, clever sense of humor, his trademark trait. He loved to banter and make people laugh and the more he liked you, the more he teased you. The saying, “laugh and the world laughs with you, cry and you cry all alone,” meant Geoffrey always had plenty of company. He also liked to cook, order Chinese takeout and everything chocolate.

Allison and Geoffrey were members of Chabad By the Sea and shared many a Shabbat dinner. He took care of both of his parents during the latter portions of their lives and was the epitome of a loyal son. And Geoffrey was devoted to Allison. They were both each other’s rocks for richer and for poorer, in sickness and in health, to love and to cherish, till death us do part. Allison took such care ensuring that Geoffrey could spend his final years at home overlooking the blue Pacific. He was also blessed to have Filiberta Lazaro, an absolute angel of a caregiver.

Geoffrey is survived by his wife Allison, son Jason, daughter Aimee, brothers Paul and Brad, sister-in laws Wendi Gilbert and Benita Duran, and nieces and nephews, Samantha, Joshua and Miles. He was a good son, brother, husband, father, friend and citizen and his vitality, wit, caring and love will be missed by his family and friends. He will remain in our hearts forever.

A burial service will be held at Beit Olam Cemetery (550 Old San Jose Road) in Soquel, on Thursday, July 23 beginning at 3 PM.  Any kind acts of charity can be made to ChabadByTheSea.com.

To send flowers to the family or plant a tree in memory of Geoffrey Gilbert, please visit Tribute Store
Thursday
23
July