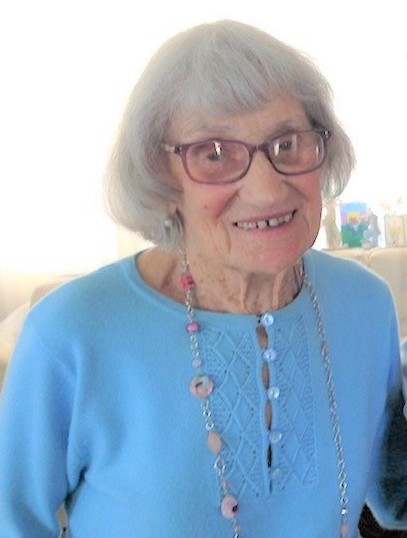 Helen P. Paterni passed away peacefully on September 18, 2020 in Santa Cruz, California at age 99½. She was born on March 25, 1921 to Leo Tambellini and Josephine Lombardi Tambellini. She was a native of Pittsburgh, PA and raised on Estella Street. She graduated from South Hills High School in Pittsburgh where she also attended business vocational school. While living in Pittsburgh she married Angelo “Nino” Paterni on June 29, 1949. In 1950 she moved with her husband and family to Santa Cruz, CA where she resided for 70 years.

Throughout her life Helen worked as a sales clerk for Gimbels Department Store in Pittsburgh as well as Eberts Department Store and Lucy’s Uniforms and Maternity Shop in Santa Cruz. She also worked for the Santa Cruz City Schools Food Services at Soquel Harbor High School where she retired after 18 years of service.

As a young mother, Helen enjoyed sewing clothes and Halloween costumes for her young daughters. While her husband was alive, Helen enjoyed attending dinner dances with Nino. One of her favorite songs was “I Could Have Danced All Night”. She also enjoyed gardening, entertaining friends and family in her home, baking her famous Potato Chip cookies, bread pudding or rum cake to share, walking all over Santa Cruz, and talking with her friends and family on the telephone.

She is preceded in death by her father Leo Tambellini in 1968 and mother Josephine Tambellini in 1993, her sister Mary Chelini in 2014, and her husband of 24 years Angelo “Nino” Paterni in 1972.

She will be laid to rest in a private ceremony at Holy Cross Cemetery beside her husband, Nino.

In the last six weeks of her life Helen was moved to the home of Lorri and Larry Evans of Santa Cruz, where she was lovingly cared for by her daughter Lorri.

To send flowers to the family or plant a tree in memory of Helen Paterni, please visit Tribute Store

Share Your Memory of
Helen
Upload Your Memory View All Memories
Be the first to upload a memory!
Share A Memory
Send Flowers