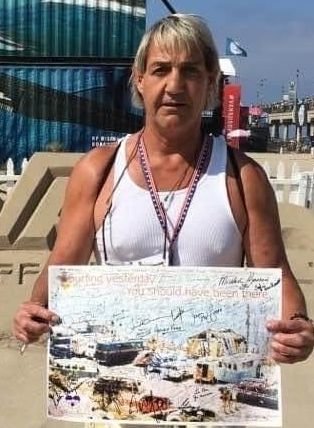 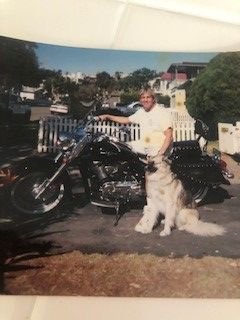 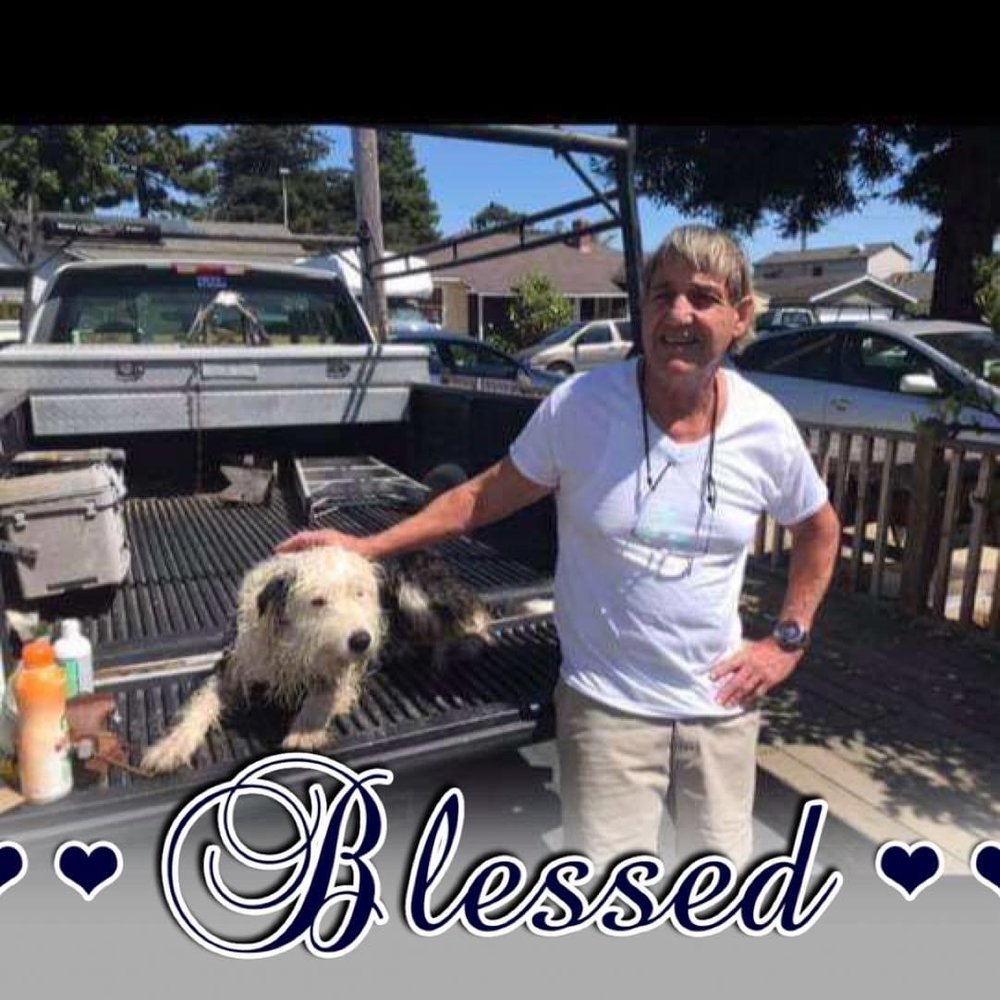 Friends and family are invited to pay their respects on Tuesday, for Joey Martinez who passed away at his Santa Cruz home.  Joey was an avid surfer and leaves many lifelong friends whom he surfed with. Beginning as a youngster, surfing at the jetties of Newport Beach, and then south all the way to Baja Mexico, Joey never strayed from the surfer's life.  Joey battled childhood diabetes for his entire life.  His family and friends marveled at his determination and passion for surfing, as Joey never let his illness stop him from doing what he loved.
He is survived by his wife Connie Montgomery- Martinez and many loving family and extended family members.  There will be a viewing on Tuesday, October 6, at Benito and Azzaro Pacific Gardens Chapel form 3 p.m. until 6 p.m.  The committal will be private.

My childhood next-door neighbor and surfing partner-in-crime Joe Martinez (Joseph Anthony Martinez Jr., age 64) died on Tuesday. I am posting a tribute here intended for those who knew him. They include Connie Martinez  David Sheraton  Richard Munson Vicki Shequin (for Keith) Dan Kenney Charles Chick Kenney Joyce Lauder Carroll (for Don) Chris Roy (who I believe shares a birthday today with Dave Mattie) Sandi King Turnbull and others from El Dorado High, Home of the Golden Hawks. Our hearts go out to Joey's family, including all his surf brothers and sisters.

I met Joey Martinez while skateboarding on the incline of our driveway in the summer of 1965 after we moved to the land of sweet-smelling orange groves in what felt like the far reaches of Los Angeles.

Joey was a kid living next door. His brother Dave was my age but we always got on well. When I started surfing during my senior year Joey and I reconnected.

Joey was the Surfaris’ consummate Surfer Joe. He was part of Placentia’s 3 Ms surfer gang: Munson, Mattie and Martinez. They even wrote him up in El Gavilan, the El Dorado High School student paper where I got my start.

Joey always was up for a ride in the Elliottmobile to seek waves at Cardiff Reef, Pipes, Swami’s, Grandview and Beacon’s in Encinitas and Leucadia.

We often reached the shoreline at dawn in shorts, flip-flops, flannel shirts or sweatshirts with hoodies. The autumnal sun would ascend slowly above the barren desert mountains to the east, tickling the sky with a pinkish glow as we paddled under and over the shore break with the hopes that this would be the day of good waves. In the era before digital wave-tracking websites like Surfline, we read the wind, the tide charts and the seasons. Heck, we’d read tea leaves if we thought it would bring the hope of nature’s fast-rushing gift.

Our adventure quests mostly were in vain because surfing demands patience and persistence but rarely a big payoff. It didn’t really matter with laughter as the soundtrack of every memorable trip. The rides “South'' were filled with a carful of surfers -- Joey sat shotgun when I drove -- as “Cowgirl in the Sand” blared from the speakers while Martinez and his gang smoked like chimneys. To this day I can feel warm plumbs of smoke blanketing us after a cold winter surf session.

We patrolled the coastline from Santa Barbara to Baja California like hunting dogs on a singular mission.

One afternoon after surfing the Newport jetties, Joey and I stopped at McDonald’s and bought dozens of burgers and fries. We took the food to Fairview State Hospital in Costa Mesa where Joey’s brother Adrian resided in a mental ward. Joey always made sure to watch over his brother who suffered from serious developmental affiliations. Attendants let us inside with the food and then locked the thick doors. Joey had visited Adrian enough to know that we had to bring a treat for everyone on the ward and not just his brother. The residents rushed us with happy faces as two visitors with wet hair cascading down their shoulders were the best part of their day. Adrian did not show much emotion but I got the sense he was happy to see his brother as fellow wards devoured the burgers and fries.

We enjoyed the visit. It reminded of how much Joey cared about his family and friends.

One early spring weekend in 1972, fellow surfing buddy Scott Smith and I decided to drive deep into Baja to search for waves. Joey tagged along. At the time, heading south on Highway 1 past Ensenada was unchartered territory for us. The highway turns inland into the magnificent and vast Baja desertland. Our destination was San Quintin, at the time a dot on the map. But first, we explorers left the highway on a sandy road somewhere south of Ensenada to sniff out a good break. A long, flat pristine beach welcomed us with no trace of humanity but no surf, either. Just offshore gray whales swam and spouted as if in an aqua show. Suddenly a Jeep approached quickly on the shore. The driver was a U.S. Navy officer taking leave for the weekend. He was tracking the whales and invited us to join him. With no one else around it felt safe to leave our boards and camping gear in the car as we zoomed up and down the beach to whale watch.

We bid the service officer adieu and continued south toward San Quintin. We had no idea where we were going in a time before every surf spot was mapped online. I turned on another sandy road toward the coast. Just as we could see waves at a point a kid ran out to greet us. Soon his father joined in. They wanted some money for camping on “their” beach. We didn’t mind. Rather, we felt it was insurance as they’d watch out that bandits didn’t rob us. I can’t remember exactly what we gave them but five bucks sounds about right.

Before arranging camp we stretched into wetsuits and paddled out. The sky was clear, the wind blew. We’d come a long way to find no signs of a swell. In early spring you just don’t know if one last northwesterly will swoop in before the long hibernation. The three of us had the ocean to ourselves so who cares? It felt good to get wet and enjoy the laughter of youth. With the prospects of surf down to about 0 percent, we decided to return north the next day. Perhaps K-55, a popular spot north of Ensenada, would have something.

First, though, we stopped in town. Smith and I wanted to check out Hussong’s, the famous cantina frequented by American surfers and tourists.  Joey was 15 so he stayed outside, getting dinner at a makeshift taco stand.

It was just another Tequila Sunrise in Hussong’s, mixed with a couple of Singapore Slings as people started sending drinks to us at the bar.  Was it something we said? We stumbled out to find Joey waiting patiently for us.

We drove at nightfall to our campsite. When I awoke in the morning I found Joey slumped over in the car. I went to wake him for a morning surf session but immediately saw the telltale signs. He was hypoglycemic. Because he was my next-door neighbor I was trained to look for symptoms of diabetes in case of such situations. Joey suffered from childhood diabetes but persuaded his parents that we would always watch over him so he could go on surf trips. He was disciplined by taking his insulin shots regularly and eating properly. But that night in Ensenada the tacos seemed to cause harm.

I screamed at Smith to come help but he couldn’t hear me over the pounding of the surf below. I stuffed a banana into Joey’s mouth. The rush of sugar helped revive him. He was groggy but slowly came around with an insulin shot, liquids and rest.

When I got Smith’s attention I said we’d have to immediately go home because I didn’t want to be in Mexico in case Joey had complications. Joe soon returned to his jovial self by the time we crossed the border and wanted to check out waves in San Diego County. Nope, I said. We’re taking you home. “Don’t tell my mom,” he pleaded. “She’ll never let me go surfing again.” We never told his parents.

A year or two later, the Martinezes took Joey and me to Baja for a weekend retreat. We stayed in a nice hotel in Rosarito, a strange experience compared to all the times we had camped on the cliffs or the beach. On that Sunday morning, the beach break in front of the hotel was pounding. Joey and I looked at each other: K-38, we said. Kilometer 38 is a nice point break that picks up a south or west swell. It was unusually still and clear for an August afternoon when the Martinezes pulled up to the cliff.

Joey and I paddled from the beach around the point to the lineup. Only three other surfers were in the water, something that would be impossible to imagine nowadays. A south swell pumped in head-high waves that rolled up in turquoise green water. The scene was otherworldly. We had paddled into nirvana, a once-in-a-lifetime moment.

My adrenaline was through the roof of the waves as Joey and I rode one after the other. I was goofy foot so I rode the steep, rolling walls of water “backside.” We barely talked while trying to catch as many waves as humanly possible.

I was feeling fatigued with noodle arms when I heard a distant cry. All five surfers had ignored it as we jockeyed for the best waves. But the cry grew louder until it slapped me across the head and I awoke from the surf zone. I turned and saw a man floating away into open water.

I yelled at Joey to follow me as I began furiously paddling through the big surf toward the drowning victim. Joey was too focused on surfing to notice anything else. I recount the rescue in my surfing book (https://urldefense.com/v3/__https://www.amazon.com/Surfing-Mastering-Intermediate-Mountaineers-Outdoor/dp/1594850992__;!!OH7Jjwzyk1GPUgacbQ!49sDJAUjtOOEUzVE-mXiM7yLJ37h1FcTGOr_lTdtdE04sAeiIzxq5mgfoq1rFgZMXfZ82mhWRnfpEA$ ) so I won’t go into detail here. Joey’s parents saw the episode from the cliff above while the victim’s family of 20 souls watched it unfold from the strand. I got the young man safely to shore.

I looked back at the break and thought about paddling out to join Joey for a few more waves. But I was spent after ferrying a half-dead man from well more than a half-mile out to sea.

I later asked Joey why he didn’t follow me to help the man. “I never heard anything,” he said. “I didn’t even see you paddle away.”

I could not blame him. Surfer Joe was in his element on one of the most profound surf days of his life.

I visited Joey in early February at his home in Santa Cruz where surfboards hung from the ceiling. He immediately talked about the current surf conditions and how he had gone surfing that morning. He talked about making sure he worked out to help control his blood sugar levels.

Joey seemed content. He never strayed from the surfer’s life.

May the next wave unfurl forever.

Sent from my iPhone

To send flowers to the family or plant a tree in memory of Joey Martinez, please visit Tribute Store
Tuesday
6
October