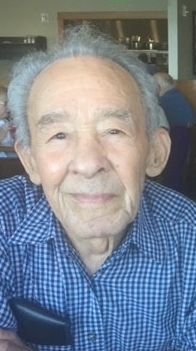 A graveside ceremony will be held in Fresno on October 8th, for Robert Osuna who passed away in Salinas at the age of 95. Born in San Diego, CA, Mr. Osuna served his country in the US Army Air  Corps as a paratrooper.  Following his service in the Army, he relocated to Fresno, CA where he worked as a diesel mechanic, realtor and later married and raised his three children.

Robert’s children and their families will forever remember his hard work ethic and his devotion to his family. He enjoyed reading, fishing and mariachi music.

One of 13 children, he was preceded in death by his twin brother Rupert, amongst other brothers and sisters, and leaves a host of beloved family and much extended family.

He will be laid to rest beside his late wife Socorro Osuna, in a private cryptside ceremony at St. Peter’s Catholic Cemetery in Fresno.

To send flowers to the family or plant a tree in memory of Robert Osuna, please visit Tribute Store
Thursday
8
October