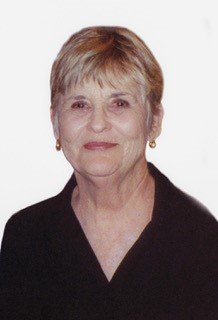 Imogene “Jean” Slaughter passed away on February 15, 2021, at the age of 92 after a decline in health following a battle with Covid 19 in November.
Born in El Centro, California on December 7, 1928 to J.W. Thomas, and Margaret Makin Thomas, Jean’s family moved to Watsonville three years later.  Shortly after their arrival, her sister, Peggy, was born.  Following their father’s death when Jean was five, she and her sister moved to Santa Cruz where they were raised by their grandmother on Seventh Avenue across from Twin Lakes Beach.
Jean made her way to Live Oak Elementary school each day, perhaps walking upon the same ground that would be her final home at Maple House II on Brommer Street.  She was a member of the Santa Cruz High class of 1947, where she met her one and only love, Jerry, who she married in 1948. They raised three children, Margaret, John and Carol.  Summers were spent with Jean and her sister Peggy, loading all the kids in the car for a day at Seabright Beach.  When grandchildren arrived, Jean and Jerry became the best grandparents anyone could have.  Rarely did they miss a soccer, baseball or basketball game.   Lifelong memories of love and connection were created for their grandchildren with a pickup after school for a frozen yogurt outing, walks downtown to peruse the treasures at Lily Wong’s, sleepovers, and summer road trips to Washington.
In the early 1970’s, after staying home to raise her family, Jean went to work for the registrar’s office at UCSC.  Jean cherished her relationships with her friends and co-workers, her position at the registrar’s window helping students out of a registration predicament, and eating her lunch surrounded by the magnificent beauty of the campus.
She had a deep appreciation of the natural world and environment.  She spent many hours gardening in the peaceful, backyard setting of the family home on Peyton Street.  It was always a major event for Jean, when ducklings were born, or a crawdad made its home in the creek running through the yard.
Jean loved Santa Cruz, and all that it had to offer.  After her retirement from UCSC, she spent mornings walking on West Cliff Drive, attending yoga classes at the Louden Nelson Center, walking downtown for a Saturday matinee, and most likely could be found at lunchtime at either Jacks, Linda’s Seabreeze Cafe or the Walnut Avenue Cafe.  Her smile, kindness toward others, and sense of humor will be missed.
The family would like to express our deep appreciation for the all the love given to our mom by her angels at Maple House.

Imogene is survived by her daughter and son-in law Margaret and Darryl Hornsby of Georgetown, Texas; her son and daughter-in-law John and Susan Slaughter of Goodyear, Arizona; and her daughter Carol Foster of Aptos.
Her grandchildren, Jennifer (Steve) Garcia, Eli Slaughter, Katie (Tim) Bock, Cory Atkinson, and Kelly (Jake) Lindemann, and her great-grandchildren Aubrey, Courtney, Grace, Anderson, Austin, Kayson, Kanin and Charlie.
She was preceded in death by her husband, Gerald Slaughter, her sister, Margaret “Peggy” Stefani, brother, Richard Tucker, daughter in law, Pamela Slaughter and son in law, Blair Foster. A private committal has taken place. Any acts of charity can be made in her memory to the Boys and Girls Club or Second Harvest Food Bank.

To send flowers to the family or plant a tree in memory of Imogene Slaughter, please visit Tribute Store