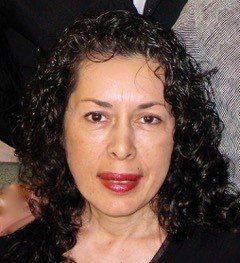 Alicia Nájera passed away in her home in Santa Cruz, California on February 25, 2021 after a three-year struggle against cancer. She is survived by her husband Russell C. Rodríguez and her siblings: John Nájera, a U.S. Navy Vietnam Veteran; her sister Olga Nájera-Ramirez and husband Ronaldo Ramírez; her brother Roberto Nájera and wife Cecilia Nájera. She also leaves her beloved nieces: Jasmine Nájera and her husband, Avery Keller; Monica Beas and her husband Leonel Beas; Elisa Alvarez and her husband Edgar Alvarez; Breena Nájera, Shelly Nájera, and her grand nieces and nephews, Amani Keller, Red Keller, Matias Beas and Elias Beas. Alicia is preceded in death by her brother Martin V. Nájera, Jr. in 2018, her mother, Epifania L. Nájera in 2017, her sister Elena Nájera in 2011, and her father Martin V. Nájera in 1964.

Alicia was born in Santa Cruz and lived in the county all of her life. The youngest of six children raised by their widowed mother in Davenport, Alicia began working at an early age to help support herself. She graduated with numerous honors from Santa Cruz High School in 1979 and received her B.A. from Stanford University in 1983.  She earned her Master’s Degree in Social Work from San Jose State University in 1986.

As a Licensed Clinical Social Worker, Alicia was employed with several non-profit agencies dedicated to serving the needs of our low-income communities. She eventually transitioned to similar work for Santa Cruz County.  At Behavioral Health Services, she became one of the first women of color in Leadership.  Alicia last served as Senior Behavioral Health Manager in charge of the South County Behavioral Health Clinic in Watsonville. Alicia retired in 2017 but in her final work years, she was instrumental in garnering support for a new and safe workplace for staff and clients in South County.

Alicia’s work ethic and her passion for social work, equality, and her commitment to racial and social justice, made her a respected leader. She negotiated with those in power regularly to ensure that the department and community’s needs for high quality services, safety and support were met. Alicia had that unique ability to engage with everyone in a respectful manner, even those who opposed her.  She was a valued mentor, advisor and friend.  Her devotion to assisting Spanish-speaking and low-income families, also meant supporting, guiding and educating clinical staff to carry that vision and commitment forward.

Alicia truly loved her life outside of work as well. Few things brought such joy to her as the time she spent with her large boisterous family. She helped care for her mother in her declining years and was a central figure in the lives of her younger relatives whom she guided and nurtured in a loving environment punctuated with good humor and occasionally one of Alicia’s well-timed salty remarks.

Alicia’s community of friends was also large yet her involvement with them ran deep. A friendship with Alicia meant a lifelong bond. She was that person you could always count on. If you were lucky enough to be Alicia’s friend, you might just have been lucky enough to get invited up to one of her gatherings. An excellent cook and fantastic dancer, Alicia took fun as seriously as she did work. Delicious food, music and dancing were always on the menu. Finding yourself surrounded by people whom you might never have known beforehand was pretty normal at her place, but that outsider feeling usually didn’t last long before you too were pulled into her raucous inner circle of family and friends.

A seasoned traveler, Alicia was always ready to hop on a plane for her next destination. She loved meeting people and tasting the varieties of cultures, arts and food. Alicia had a special fondness for Florence Italy, but her adventuresome nature could never confine her to a single locale. Indeed, apart from traversing the many corners of the U.S., she ventured to over 21 countries in Europe and throughout the Americas in her lifetime.

Beautiful, smart, humble, and funny, Alicia had many admirers but was never one to settle for anything, especially in love. Russell and Alicia were already each in the midst of fulfilling careers and lives when they began dating.  Yet as their lives now paralleled, intertwined, and joined, they never lost their individual completeness; instead they complemented, supported and enhanced each other. Their marriage was a life filled with romance, adventure, laughter and music. And while Alicia always held a special place deep within for Prince and the Beatles, no musician could ever touch her soul quite like her own multi-talented composer musician and partner, Russell.

When cancer began its devastating and cruel attack on her shortly after she finally retired, Alicia fought it the same way she had battled everything throughout her life, with courage, strength and without an ounce of self-pity. She found ways to smile in her agony, enduring numerous treatments, surgeries, pain and setbacks with a steadfast commitment to facing down this monster growing within her. She gave that beast hell, but it was relentless and unmerciful and when Alicia knew she was nearing the end, she made the decision to let go of her treasured life with the same clear eyed well-reasoned compassion and love that she brought to all facets of her life. Letting go of her many loved ones was perhaps the hardest part for her, but with such enduring kindness and love, she was able finally to let go, surrounded by all she truly cared for, Russell, family, music and love.

Alicia, contigo aprendimos.  A life well lived doesn't have to be long, it just has to be good.

Alicia requested that a public ceremony not be held until it is safe to do so. Her family will announce an appropriate time and place for all to celebrate Alicia’s life and legacy. In lieu of flowers, donations can be made in Alicia’s memory to the Myotonic Dystrophy Foundation (MDF):

Or donate online at: http://www.myotonic.org/node/81

Share Your Memory of
ALICIA
Upload Your Memory View All Memories
Be the first to upload a memory!
Share A Memory