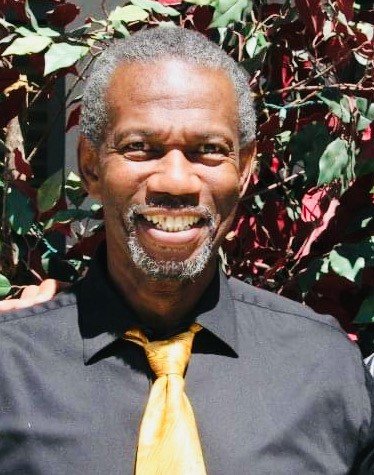 John Wesley Mullen was born to Percy and Velma Mullen (Mississippi) Feb. 15th, 1949 in Detroit, MI. John was the third eldest of nine children, following Henry Henderson and William (Bill) Henderson. The Mullen family settled in Portland, OR where the majority still reside.

After the loss of both his mother and father, John, the eldest Mullen, became head of the family at the age of 17. John’s faith in Christ was strong and continued to grow throughout his life. He graduated from Benson Polytechnic High School and attended Lewis and Clark College on a music scholarship. After school, John served in the U.S. Army and was stationed in Germany. Upon returning home he opened Old Bloods Shoes in Portland. He would go on manage Nordstrom shoe departments in both Oregon and California, later becoming a commercial and residential window salesmen.

John was a beloved father, husband, brother, uncle, coach, granddad, friend and veteran. He loved singing in local choirs and performing in theatre. He loved fishing at Loch Lomond and Antonelli Pond with his sons. John was a baseball coach and umpire for his sons and many others in the Pony, Colt and Palomino baseball leagues. As a coach, John was known for his loud, deep voice, his long winded pre and post-game speeches, and occasionally getting tossed out of games. If John wasn’t on the field, he could be found in the snack shack cooking up the famous “Mullen Burger”. John found joy in supporting his children’s passions. He was happiest watching his children compete and reliving the glory days. He learned about dance and enjoyed watching his children’s performances. He loved attending his sons football, basketball, and baseball games, recitals, track meets, junior guard competitions and his daughter’s soccer games and horse shows.

John was a storyteller of classic, exaggerated dad stories. He was always the fastest runner, the heaviest lifter and caught the biggest fish. Later in life, the focus of those stories would shift to the accomplishments of his children and grandchildren. His pride for the Mullen family and name was unmatched. John deeply enjoyed visiting his Oregon family and would share stories about his love for his daughter Danielle and her jokes, Brenda’s heart for everyone, Norma’s cooking and singing, Percy’s preaching, Lois’s genuine spirit, his closeness with Linda, and deep love for his brother Kevin.

John passed away March, 3 at the age of 72. He was preceded in death by his parents, Percy and Velma Mullen and his siblings Henry Henderson, William Henderson and Brenda Mullen-Portis.

Due to Covid restrictions, a memorial service will be held Mar. 21 for a limited number of guests. Please contact the family for more information.

To send flowers to the family or plant a tree in memory of John Mullen Sr., please visit Tribute Store