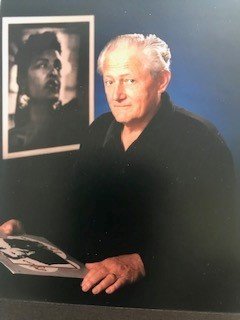 Richard “Dick” Erlin passed away at home on Sunday March 21, 2021. He was 93. He was born in San Francisco on February 9, 1928, the son of Richard Erlin, Sr. and Margaret Rhine Erlin. Dick grew up in San Francisco and Redwood City through his freshman year of high school. During summer breaks as a teenager, he sailed the Great Lakes as a deckhand on an iron ore freighter and later with the Coast Guard to support the war effort during World War II. Upon his graduation, at age of 18, he joined the US Marine Corps.

Dick met the love of his life, Shirley Scott Hovey when she worked at the soda fountain at Forest Pool in Boulder Creek in 1948. He and Shirley married in 1949 -- a union that lasted 64 years until her passing in 2013.

He was an entrepreneur, owning multiple small businesses and investing in real estate throughout his life. He was a devoted and passionate husband to Shirley. An avid baseball fan, he was active in the Santa Cruz Little League for over ten years.  He played a key role in the planning and development of the newer Pony League and Girls softball fields as well as the Minor League field at Harvey West Park. He enjoyed Big Band Era music including his favorites; Glenn Miller, Benny Goodman, Count Basie and Duke Ellington. He could fix anything mechanical and also designed and built his home in Carbonera.

He is survived by his daughter, Kathi Davison of Corsicana, TX; son, Rick Erlin and his wife Sue and three grandsons, Matt, Tom and Rob. He was preceded in death by his infant daughter, Terry; daughter Valeri (29) and Jacki (52) as well as his wife Shirley.

To send flowers to the family or plant a tree in memory of Richard Erlin, Jr. , please visit Tribute Store

Share Your Memory of
Richard
Upload Your Memory View All Memories
Be the first to upload a memory!
Share A Memory
Send Flowers
Plant a Tree