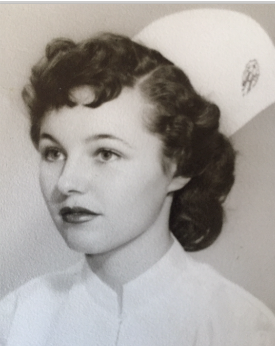 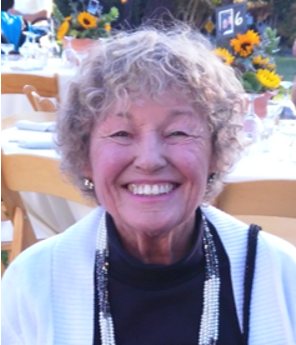 Maureen Kathryn Olin left us peacefully at home surrounded by her loved ones on Tuesday June 2nd, 2021.

Maureen was the eldest of 4 children and was born on September 6th 1936 at the ‘house on the hill’ in Antioch, California.  Her parents Elizabeth Ann Muir (Skube) and Laurence James Muir were both born in Pueblo, Colorado and were engaged in 1935.  In late 1935, they moved to Antioch, California - so that Laurence could pursue a job at the new steel mill. Later that same year, they were married and subsequently raised their four children in Antioch.

The Muir family grew with the births of her brothers Larry and Richard, and finally her baby sister Buffy (Elizabeth Eichman).

Maureen was an excellent student and always tried to sit up towards the front of the class as close to the teacher as possible.  Her friends teased her that she was just trying to ‘kiss-up’ to the teacher but in reality, Maureen suffered from impaired hearing for her entire life.  In her adult life, her lip-reading was amazingly good.  Her lifelong love and career in nursing (57 years) was inspired by a summer visit to see her Aunt Ann in 1942 who was a prominent RN in Los Angeles.  The first book she read at the end of that summer was a book on Clara Barton, nurse, humanitarian, and the founder of the Red Cross.

Maureen graduated early (17) from High School to accept a scholarship to the Queen of Angels hospital in Los Angeles.  It was at a Queen of Angels School St. Patrick’s Day dance where she met the man who would be the love of her life – Lee Olin – and they were married on July 6th, 1955 exactly a month after she graduated with her Nursing degree.

She was both an A student and a self-professed Type A personality and she was the first in her family to go to college.

Lee and Maureen honeymooned in Las Vegas, using a fake identification for Maureen that Lee had ‘procured’ in Tijuana so she could drink and gamble.

Maureen and Lee had two sons (Carl & Curt) in Los Angeles and then moved to Santa Cruz in 1959 as Lee accepted a teaching position at Santa Cruz High School and Maureen accepted a job at Dominican Hospital.  Santa Cruz was the birthplace of her next three children – Laura, Maureen, and Christopher.

Early in her nursing career, Maureen suffered a serious back injury while working at Dominican and did not return to full-time work for another 14 years.  Maureen applied for a less-physically demanding Director of Nurses position at the Dominican Hospital Physical Rehabilitation center and she was hired on the spot.  Getting hired and having the pick of positions would define her next 15-20 years of employment – a situation that Maureen attributed to a growing need for Convalescent staff in Santa Cruz county and a lack of qualified nurses.   After her ‘retirement’ from Nursing she then volunteered for Hospice of Santa Cruz for another several years before finally retiring in 2015.

Maureen’s unconditional empathy and love for her family was boundless.   Her smile and overall positive attitude were always infectious, there were few flowers that she did not like, few biographies she did not read, she always knew what was important in life, and she loved spring and summer as the flowers would emerge, and the temperatures would warm up after she had enjoyed watching the Warriors all winter.  March was one of her favorite months as it not only featured her beloved March Madness College basketball tournament but it also has St. Patrick’s Day – her chance to get her family together.   The 1990 trip with her husband Lee to Indianapolis to watch the Final Four College Basketball tournament and subsequent 10-day road trip to Kentucky was the best trip she ever took she often said.

She loved her home in Scotts Valley because it offered room for her children to experience real unbridled outdoor activities and it allowed her husband Lee to be the real ‘gentleman-farmer’ that he called himself in jest.

She will be missed.

Maureen was preceded in death by her husband Lee.

The family wants to our express our most heart-felt thanks to the wonderful staff of Hospice and all of her dear friends and family.  In lieu of flowers please donate to the amazing Hospice of Santa Cruz County, 40 Disc Drive, Scotts Valley, CA 95066.  (831) 430-3000

To send flowers to the family or plant a tree in memory of Maureen Olin, please visit Tribute Store

Share Your Memory of
Maureen
Upload Your Memory View All Memories
Be the first to upload a memory!
Share A Memory
Send Flowers
Plant a Tree