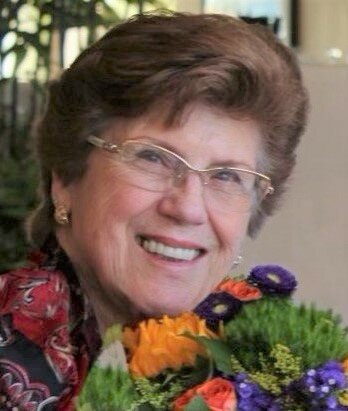 Barbara Mary Schaarschmidt passed away peacefully on October 27, 2021 at the age of 89 surrounded by her fam- ily. Born in Los Angeles, CA to Earnest and Vibiana Mazy, she graduated from Eagle Rock High School. While attend- ing her High School dance, as a sophomore in 1948, she met a handsome US Marine, Carl Fred Schaarschmidt. He was the love of her life and they were married in 1950. Barbara and Carl had 8 children. She was a homemaker, loved teaching 4-H, cooking, crafts and sewing. She was a beautiful quilter. She worked as an instructional aide for special needs children through the Santa Cruz County of- fice of education for 11 years. Mrs. Schaarschmidt fondly known as “Oma” loved family gatherings and celebrations, especially spending time with her grandchildren and great grandchildren. In 1995 Mrs. Schaarschmidt, along with her husband, started the STARS ministry at St. Joseph’s Church for people with disabilities that was nationally recognized by Catholic ministries and is still an active ministry today. She was a long-time parishioner of St. Joseph’s Catholic Community in Capitola. Mrs. Schaarschmidt is survived by her sons and daugh- ters-in-law, Fred and Renee’ Schaarschmidt of Sun Tan Valley, AZ; Kurt and MaryJo Schaarschmidt of Grand Terrace, CA; Carl and Lisa Schaarschmidt of Castroville, CA. her daughter, Lisa Perry of Placerville, and daugh- ter and son-in-law Mary and Richard Etow of Watsonville; and her son, James Schaarschmidt of Santa Cruz. She also leaves 18 grandchildren, 13 great grandchildren, her brother and sister-in-law Ray and Sandy Mazy, sister-inlaw Carol Mazy all from Carson City, Nevada and sister Jean Audette of Burbank, CA Mrs. Schaarschmidt was preceded in death by her husband of 70 years Carl Fred Schaarschmidt, daughter Vibiana Bruno and her son, Paul Schaarschmidt. One of four children, she was also preceded in death by her brother Ernest Mazy. A joint funeral mass is being planned for both Barbara and her husband Carl at 11 am on February 26, 2022 which will be celebrated at St. Joseph’s Catholic Church in Capitola. They will be laid to rest in the Soquel Cemetery, beside their son Paul, who preceded them in death in 2000. In Lieu of flowers, Barbara and Carl kindly request donations be sent to the STARS Ministry c/o St. Joseph’s Catholic Church in Capitola.

To send flowers to the family or plant a tree in memory of Barbara Schaarschmidt, please visit Tribute Store
Saturday
26
February

Share Your Memory of
Barbara
Upload Your Memory View All Memories
Be the first to upload a memory!
Share A Memory
Send Flowers
Plant a Tree