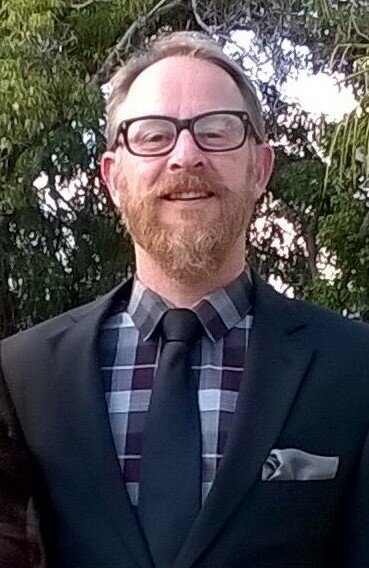 Andrew Phipps; passed away unexpectedly at his residence at the age of 51. He was born in Melbourne, Australia but at the age of one, his family moved to Stawell, which is where he was raised. Somewhere in his youth he was given the nickname “Fish.” No one could ever really explain how it happened just that it stuck. His best guess was that there were 5 other Andrews in his kindergarten class and his last name, Phipps, sounded like chips. So, it was a play on fish and chips. Fish attended Stawell Technical School, completing a computer tech cadetship with Telecom Australia in Ballarat. While working for Telecom Australia, the company was looking to downsize so they asked for volunteers to retire. Thinking he would never get chosen, Fish volunteered repeatedly. At the age of 23, he was chosen and given a retirement package. Looking for a change, he signed up to work at an American summer camp. He ended up in Milford, VA at Camp Easter Seal-East as a camping and nature specialist, which is where he met his wife and lifetime companion of 28 years, Angie. After a couple of years, Fish eventually went back into the world of IT, which brought them to Santa Cruz, CA, where they settled and had one child, Lucas. Fish’s priority was always family. He was a dedicated and loving father who quit his Silicon Valley job so that he could actively raise his son equally with his wife.

Fish was truly almost a renaissance man. He was an avid athlete playing Aussie rules football and cricket throughout his entire youth, playing in both Australia and the US. He surfed, played tennis and rock climbed. At one point he was a certified lifeguard on 3 continents. He was a painter, winning numerous awards as a teenager. He was an avid musician. He began playing the guitar in 3rd grade, played the drums, multiple percussion instruments, composed music, and created his own record label. He built computers and various electronic devices. He cooked, gardened, sewed, was an avid reader and could build almost anything out of wood. His only downfalls were that he never taught his wife to swim and could not sing or dance. Fish left an imprint on those he met. He was kind and accepting of everyone. He treated everyone with respect but made an extra effort to do so particularly with individuals who were marginalized by society. He had an amazing witty sense of humor that was unmatched.

He is survived by his wife, Angie Madrigal Phipps; his son, Lucas Phipps; his mother, Chris Phipps; his brother, Brett Phipps and his sister-in-law, Carmel McAloon; 3 nephews; 2 aunts; and his dog, Luna. He was preceded in death by his father, David Phipps.

A memorial service, by invitation only, will be held on Saturday, January 22, 2022, at Benito and Azzaro Pacific Garden Chapel beginning at 11:00 a.m. It will also be live streamed at https://client.tribucast.com/tcid/4165965622

It will be followed by a celebration of life at 1:00 p.m. at Shaffer Park, which will be open to all (masking will be required).

To send flowers to the family or plant a tree in memory of Andrew "Fish" Phipps, please visit Tribute Store

Share Your Memory of
Andrew "Fish"
Upload Your Memory View All Memories
Be the first to upload a memory!
Share A Memory
Send Flowers
Plant a Tree