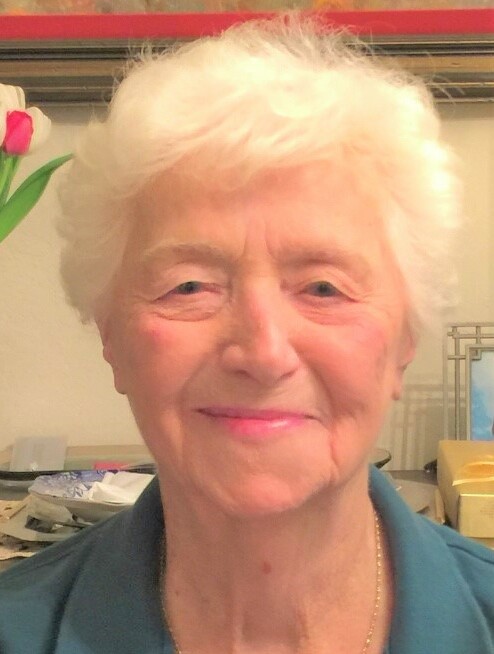 Wanda Pauline Raffaelli (Haskett) passed away peacefully at the age of 92 at Dominican Hospital, with loved ones by her side.

Pauline was born in Indianapolis, Indiana, to Dama Beatrice Haskett (Smith) and Eugene Paul Haskett in 1929. In 1944 she relocated with her mother and sisters to Santa Cruz, California via a Greyhound bus on Route 66.

In 1953 she married Mel Parker, and had her first child, Thomas in 1956. The two later separated. She married Angelo Raffaelli in 1960, and together they had two children, Roberto and Cristina. The couple raised their family in Santa Cruz, and ran the Gulf Station and later Mobil Station on Mission Street from 1966 to 1990.

Pauline and Angelo were active members of the Italian Catholic Federation (ICF) Branch #21, Sons of Italy, and the Marconi Club, and enjoyed the many dinner dances with these organizations.

Pauline’s love of learning led her around the world. Her love of history brought her to locations rich with historical and cultural significance, such as: Rome, Florence, Venice, Milano, Paris, Cairo, London, Boston, Philadelphia, NYC, and Washington D.C. A prolific reader and historian, Pauline discovered a passion for genealogy, and traced her family lineage back to the late 1700s. She collected years of research and correspondence with distant relatives, contributing a wealth of information to Ancestry.com.

Pauline enjoyed many great friendships in her lifetime, some spanning over 70 years. She was well known for her kindness, warmth, and genuine interest in others’ lives. She welcomed people with open arms into their home, and many friends, family, and acquaintances share fond memories of delicious meals at her table.

Pauline’s family is her greatest joy, and she was happiest when all gathered together. She loved music, and cherished singing Christmas carols with family during the holidays.

She was preceded in death by her mother and father, sisters Patricia (Pasty) Toshikian and Nora (Nonie) Whitehead, and niece Judy Whitehead.

Pauline will be dearly missed by many, and leaves behind a legacy of love and service. A celebration of life will be planned and announced in the near future. This article will be reposted with the details. In lieu of flowers, contributions may be made in her memory to Friends of Santa Cruz Public Libraries (fscpl.org), P.O. Box 8472, Santa Cruz, CA 95061.

To send flowers to the family or plant a tree in memory of Wanda Raffaelli, please visit Tribute Store

Share Your Memory of
Wanda
Upload Your Memory View All Memories
Be the first to upload a memory!
Share A Memory
Send Flowers
Plant a Tree