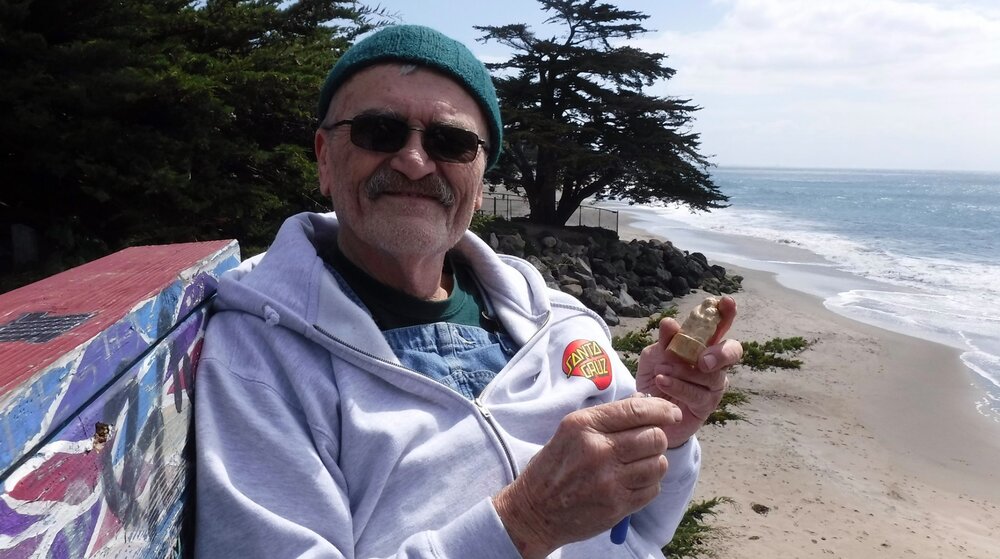 Bill Horgos died on April 26, 2022 after his fourth battle with cancer. .He passed at home with a switchblade knife in his pocket shortly after completing his final carving: Captain Ahab.

Bill, born Horgos Vilmos on April 1, 1945 in Hungary, roared into this world as a 12-pound baby approximately one month before the end of World War II. As he once wrote, “,,Hungary,, April 1st, 1945,, With my father on the Eastern Front ,My mother scampering through cornfields holding my three year old sister while going into labor with me,,,, B29's wing tip to wing tip dropping carpet bombs with Stukas screaming in the sky,, Ah the good times,,,”

After the Hungarian Revolution, Bill fled with his mother and sister in 1957 and stayed in a refugee camp in the former Yugoslavia. He arrived in New York City on Halloween and felt right at home. After a brief stint in Chicago, Bill grew up in San Francisco, where he went to art school and mastered the art of the female form. He spent several years working at Renaissance Faires across California, where he sold everything from wooden bears to whistles.

Bill loved swimming in the San Francisco Bay and belonged to the Dolphin Club and the Southend Rowing Club for many years. He was known for his ugly swim stroke and his ability to swim forever; he came up with the idea for people to take a shot of tequila every time they completed a one-mile lap at the infamous Five Coves of Death held every Cinco de Mayo.

Bill met the first love of his life in 1990 with the birth of his daughter Bonnie. He taught her how to create and always let her grab onto his sides while swimming in the San Francisco Bay. He met the other love of his life, Simone, shortly after, and they married in a small wedding ceremony in their houseboat community garden in 1996; the bride wore cowboy boots and the groom wore a paint-splattered apron.

Bill spent the last two decades of his life honing his skill as an “,,Easy feeder,, Handy around the house,, Likes to make things,,” in Aptos, California. He took his dog Sadie, then Rocco, to the dog park every day, where he would carve on the bench and take close-up photos of all the dogs. When he wasn’t at the dog park, Bill loved whittling in his corner and driving up the coast with Bonnie and Simone while listening to the oldies.

Bill is survived by his nephew Steven and his great-niece Elle, as well as his daughter Bonnie and his wife Simone, who will love him until the end of time. We’ll keep feeding the birds and watering the plants.

To send flowers to the family or plant a tree in memory of William Horgos, please visit Tribute Store