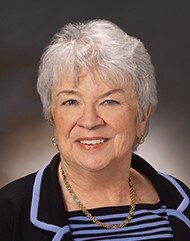 Sister Julie Hyer, formerly known as Sister Ann Warren, died on Wednesday, July 27, 2022, at her home in Capitola, California. She was 74 years of age and in the 54th year of her religious profession in the Adrian Dominican Congregation.

Sister Julie was born in New York, New York, to Warren and Ann (Lehosky) Hyer. She graduated from Rosarian Academy in West Palm Beach, Florida, and received a Bachelor of Arts degree in Mathematics from Siena Heights College (University) in Adrian, a Bachelor of Science degree in Medical Records Administration from Mercy College in Detroit, Michigan, and a Master of Business Administration degree in Business from the University of Detroit, now the University of Detroit Mercy.

Sister spent one year ministering in education in Detroit, Michigan, and then began ministering in the health care field. From 1975 to 1976 she was assistant director of medical records at St. Joseph Mercy Hospital in Detroit. From 1976 to 1985 she ministered at Samaritan Health Center in Detroit, first as director of medical records, then as administrative assistant and vice president of medical services. In 1985 she became president and CEO of Dominican Santa Cruz Hospital in Santa Cruz, California, serving until 2006. She ministered from 2008 to 2010 as president and administrator of Salud Para La Gente in Watsonville, California. In 2010, she was elected General Councilor/Administrator on the General Council of the Adrian Dominican Sisters.

Throughout her tenure she served on many committees and boards including: CHW/Dignity Health Board of Directors (2008-2019), Common Spirit Health Committee (2019-2022), the religious council for the Diocese of Monterey, Lifeguard Foundation, Janus Organization, Dignity Health Insurance Trust in the Cayman Islands, Vietnamese Monks Monastery, Cistercian Monastery of our Lady of Grace, Our Lady of Fatima, and Women in Crisis. She was also consultant to the Live Oak Senior Center.

Sister Julie was preceded in death by her parents. She is survived by two brothers, Warren Hyer Jr. of Lawrenceville, New Jersey, and Gregory Hyer, of Lawrence Township, New Jersey; a sister, Marianne Hyer, of Aptos, California; other loving family and her Adrian Dominican Sisters.

Due to COVID-19 mitigation protocols, the Dominican Life Center is closed to all guests or visitors until further notice. All are welcome to participate in Sister’s services via livestream at https://adriandominicans.org/Live-Stream

The Vigil Prayer will be held at 7:00 pm on Thursday, August 4, 2022, in St. Catherine Chapel. A Mass of Christian Burial will be offered in St. Catherine Chapel at 10:30 am on Friday, August 5, 2022. Prayers of Committal will be held in the Congregation Cemetery. A Memorial Mass, with Bishop Daniel García presiding, will be celebrated at 6:00 pm on Wednesday, August 3, 2022, at Holy Cross Parish in Santa Cruz, California. Memorial gifts may be made to Adrian Dominican Sisters, 1257 East Siena Heights Drive, Adrian, MI, 49221.