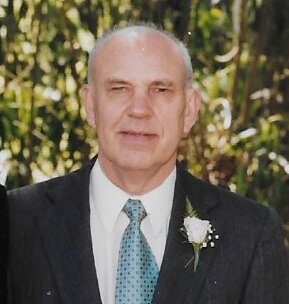 Raymond Charles Trebbien, age 91, passed away peacefully after a lengthy illness at his home in Santa Cruz on November 22, 2022. Ray was the son of Charles and Charlotte Trebbien and loving husband of Jeanne Marie Trebbien.

Ray was born and raised on the family farm in Milford Iowa. After graduating from Milford High School, he was invited by his older brother to join him in Los Angeles for educational opportunities. Ray worked his way through college and earned Bachelor’s and Master’s degrees in Political Science from California State University of Los Angeles. It was in college that he met his wife Jeanne Josephson and in 1957 they were married in Jeanne's hometown of Joliet Illinois.  After college Ray worked as a Land Appraiser for the Los Angeles County Assessor's Office until he lost his eyesight due to glaucoma. His deep Catholic faith helped him cope with this physical setback.

In 1968 the family moved to Santa Cruz. With Jeanne pursuing her teaching and counseling career, Ray assumed many of the home duties which was not commonplace at the time. Ray was a constant listener of radio and TV political news as well as books on tape and wrote many letters to local, state and national politicians to express his views.  Additionally, he served as the local Chapter President of the National Federation of the Blind and was active for over 25 years in the Monterey Bay Boy Scouts Council (from which he received the Silver Beaver award).

In the last few years Ray enjoyed using his Amazon Echo to listen to news, play music and obtain information from the internet. Ray was well known for his keen sense of humor and wit and will be greatly missed by family and friends.

Funeral Services will be at Holy Cross Church on December 7, at 11:00 a.m. followed immediately by a reception at Holy Cross Hall. Remembrances can be sent to the Vista Center for the Blind and Visually Impaired, 3315 Mission Street, Suite B, Santa Cruz, CA 95065 (or to your favorite charity).

Share Your Memory of
Ray
Upload Your Memory View All Memories
Be the first to upload a memory!
Share A Memory