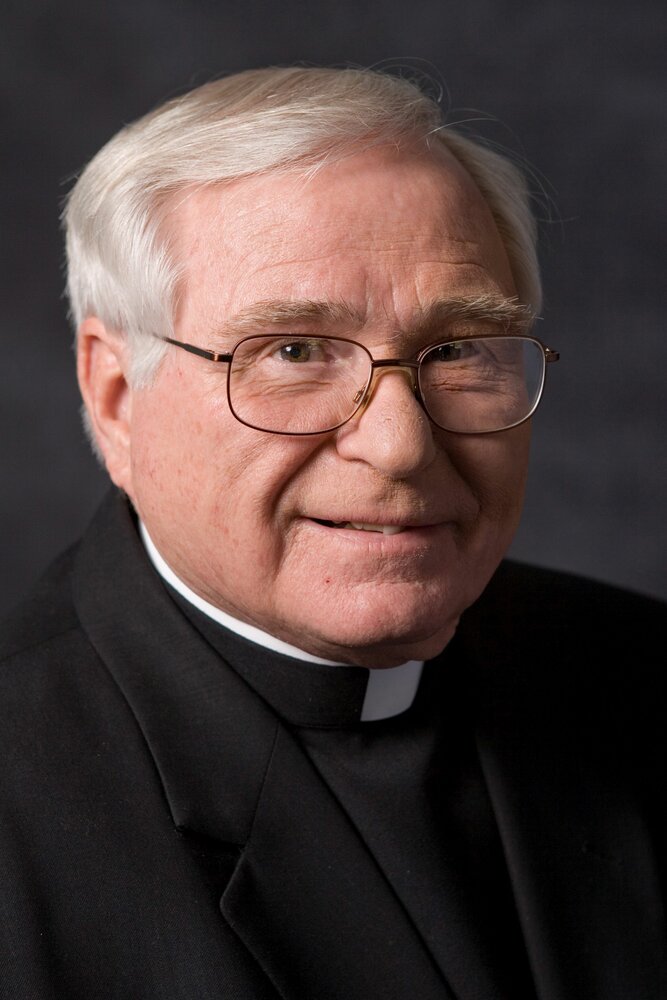 The Mass of Christian Burial will be celebrated January 23 in Salinas for Fr. Michael Cross who passed away in Santa Cruz at the age of 87.  Born in Ponca City, Oklahoma, he graduated from Ryan Preparatory College in Fresno and St. John’s Seminary in Camarillo.  He was ordained into the Diocese of Monterey-Fresno on May 1, 1962.  Fr. Cross began his 60-year career as a Catholic priest at Sacred Heart Parish in Fresno. Following the newly formed Diocese of Monterey, he became an associate pastor at St. Joseph’s Church in Capitola from 1966-1968.  Fr. Cross also served at Sacred Heart Parish in Salinas (1968-1973); Nativity of Our Lady Parish in San Luis Obispo (1973-1979); St. Joseph’s in Capitola (1979-1983); and Madonna del Sasso in Salinas (1983-1996)

In 1996, upon the retirement of Msgr. John Kennedy, pastor of St. John’s Church in Felton for 17 years, and the third Irish born priest to pastor since the church’s construction in 1951, Fr. Michael Cross was named the fourth rector of the parish.  For more than 22 years, Fr. Cross served the community of Felton, often remarking how blessed he was to have made lifelong friends there. He also often recalled the many pleasant memories of working with the students of Campus Ministries at Cabrillo College. Fr. Cross was instrumental in working with the Hartnell College Newman Foundation and the restoration of John Steinbeck’s home built in 1896. Under his guidance, it served as center for the Newman Club. Student members took on the task of renovating the house, and used it as a student residence and meeting hall.

He will be lovingly remembered for his devotion to the parishioners he both served and prayed for.  Fr. Cross was very proud of the commitment his seminary classmates made to stay connected through the past 60 plus years.  He cherished the annual dinner gatherings to celebrate their friendship; supporting each other through difficulties and the passing away of more than half of their classmates. He was very proud of authoring his book “Remembering Big Jim- Memoirs of a Parish Priest” a story told often with intrigue and humor of his  journey from boyhood to priesthood, and of a man who had become like a kind of adoptive father, role model, and source of inspiration in his desire to become a priest.

Fr. Cross leaves his sister, Carolyn Cross of Ridgecrest, CA. and his nephews Michael R. Cross and Stephen Kauble and their families.

Friends in the Santa Cruz area may pay their respects at a viewing, which will be, take place on Sunday, January 22 from 1 -5 p.m. at St. John’s Catholic Church (Highway 9 and Russell Ave) in Felton, followed by a vigil ceremony starting at 5 p.m.  The funeral mass will be on Monday, January 23 at Madonna del Sasso Church (320 E. Laurel Drive in Salinas) beginning at 10 a.m. and followed by the committal ceremony at Queen of Heaven Cemetery (18200 Damian Way, Prunedale, CA 93907)In lieu of flowers, donations are preferred to the Diocesan Fund for Retired Priests c/o Diocese of Monterey (425 Church St., Monterey, CA 93940) and stipulate “Diocesan Fund for Retired Priests” in the subject line.