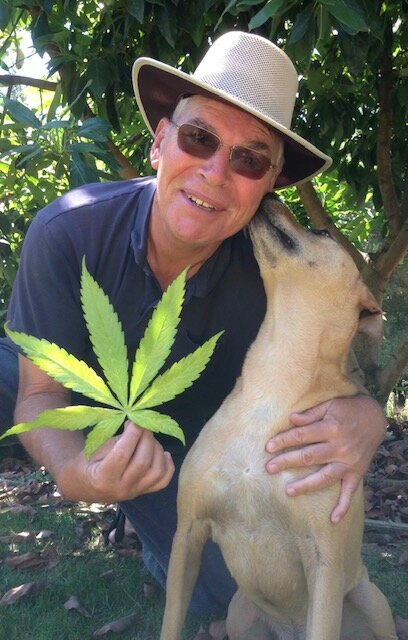 Jim Geesman, an amiable giant of a man who miraculously outran glioblastoma-IV for nearly 17 years (only .71% survive more than 10 years), peacefully passed away the night of December 16.  His beloved daughter and son, and their families, were at his bedside with him in his Aptos home.

Jim was preceded in death in 2015 by his wife of 32 years, Betty LeChevalier Geesman, and together they raised two remarkable children and enjoyed a network of close friendships.  They were well-known in the Santa Cruz County community from Betty’s long tenure as an educator in the Pajaro Valley Unified School District and Jim’s role for many years as an announcer at Aptos High School sporting events.

Family was Jim’s priority, and the high point of his last months was the overwhelming joy he felt from holding his two infant grandsons, Cyrus and Odin.  He derived immeasurable satisfaction from the successful launch of his own children into adulthood, and deeply regretted that Betty was not alive to fully share in it.

The first two decades of his life were spent in Lakewood, California, where he was born and raised.  His dad was a salesman, his mother a housewife, their home purchased in 1950 through the GI Bill.  Social commentators from D. J. Waldie to Joan Didion have elevated the otherwise anonymous Lakewood to the cultural prototype for the mid-20th Century American insta-suburb.  Jim just thought it was a great place to grow up.  He was a good athlete, a high school letterman in several sports who found his true calling as a lean-and-mean heavyweight wrestler.  Off the mat, he was a kind and softspoken friend to many.  On the mat, he was to be avoided.

Jim met Betty on the volleyball courts at Sonoma State University, where both of them fostered a love of athletics that they would pass on to their children.  After their college graduations, they moved to Santa Cruz and began careers and a family.  Jim commuted over the hill every day to jobs in the Silicon Valley technology industry, and for several years stretched his days to complete an executive Masters in Business Administration program.  His parents and grandmother relocated from Lakewood to Capitola, and Jim and Betty were important fixtures in their lives in the 1980s and 1990s.  With the arrival of Glenn and Michelle, four generations lived a few miles apart and shared many day-to-day experiences.

As his children matured and left home for college, Jim turned more of his attention to his golf game and became quite accomplished.  In his later years, he played nearly every day, hit three hole-in-ones, won multiple tournaments, and was twice named Golfer of the Year by the Seascape Golf Club – this despite suffering debilitating seizures every 6 – 9 months, and forfeiting one victory to a zealous competitor’s protest that smoking his medicinal cannabis on the fairways gave Jim an unfair advantage.

Most of all, he reveled in his children’s collegiate accomplishments.  From Glenn’s graduation from the Massachusetts Institute of Technology, and All-American designation as a heavyweight wrestler, to Michelle’s workout discipline and teamwork skills as a graduating four-year varsity starter on the heralded University of San Diego Women’s Rowing Team, Jim took pride in how they thrived once out on their own.

To send flowers to the family or plant a tree in memory of James Geesman, please visit Tribute Store