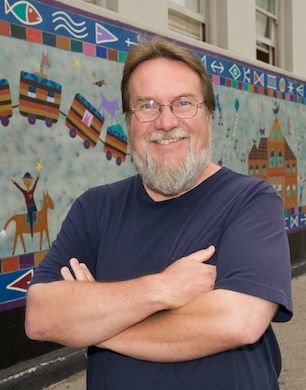 After a full, fun-loving, action-packed 66 years, artist and muralist James Carl Aschbacher passed away from a stroke on April 25, 2018. His wife and soulmate of 40 years, film critic and author Lisa Jensen, and several dear friends, were at his side. Born October 9, 1951, in Evanston, IL, James was for 16 years co-proprietor of Atlantis Fantasyworld comic book store with Joe Ferrara. At age 40, with no previous artistic training, James gave up retail to pursue art full-time. Entirely self-taught, his whimsical, distinctive style involved figures and animals surrounded by a border of magical symbols. An inspiration and mentor within the thriving Santa Cruz arts community, James was a popular Open Studios artist for over 25 years, and former Chair of the Open Studios Committee at the Arts Council of Santa Cruz County. He left his mark as a muralist on buildings countywide, including 10 years painting murals at local elementary schools with 4th and 5th-graders, for which the children were encouraged to create and paint their own creatures.

James loved Santa Cruz, and the feeling was mutual; friends and colleagues recall his kindness, generosity, his willingness to work hard, his upbeat sense of humor, and the twinkle in his eye.

Although best known as "Art Boy," James also loved cheesy '50s monster movies, and poster art. He and Lisa enjoyed a part-time career as single-panel cartoonists. An intuitive cook, he was well known for his fabulous homemade pizza. And he loved champagne. He thought every day of life should be a celebration — as it was for him.

To send flowers to the family or plant a tree in memory of James Aschbacher, please visit Tribute Store