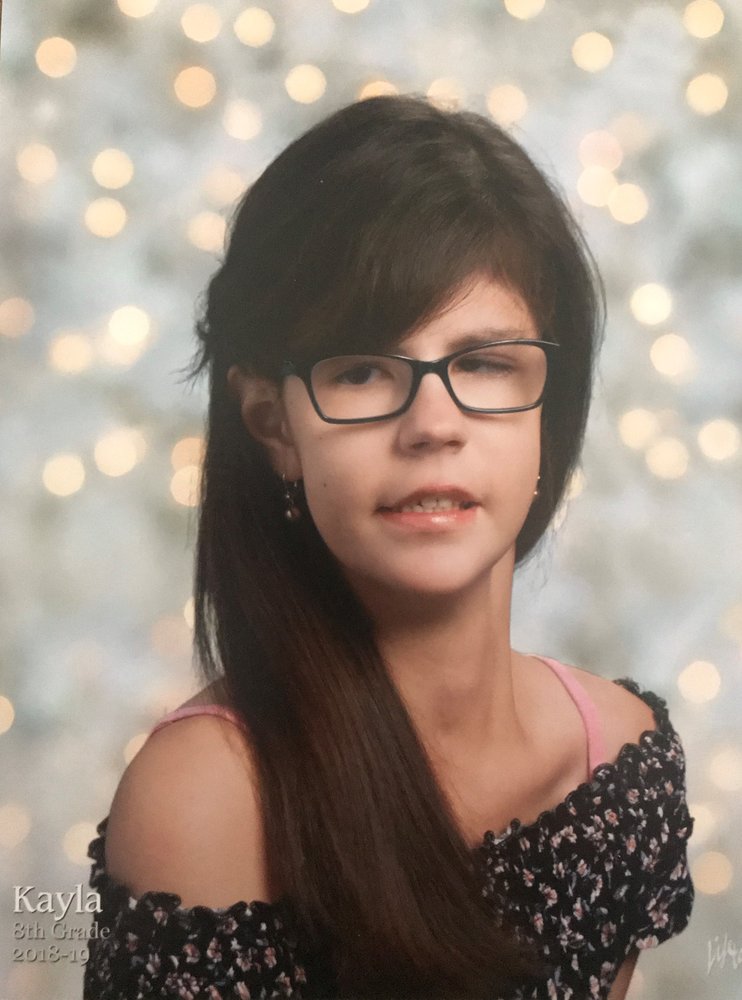 Kayla embraced those that she trusted with her whole heart. For those special people that she let in, she showed a side of herself that not everyone got to see. She had a great sense of humor, she was gentle, kind, empathetic and she genuinely loved life. Kayla loved showing her affection by planting gentle kisses on her loved ones faces. She also gave the most amazing hugs. She loved to dance and adored music from an early age. She especially loved the music of Eric Hutchinson and wouldn’t go to sleep at night until we played his songs. Kayla has blessed our lives and her spirit will live on forever in our hearts.

Kayla was born at Sutter Memorial Hospital in Sacramento, California in 2005.  She began her early intervention and education in Rocklin, CA, and transferred to the Soquel Union School District in Santa Cruz County in Kindergarten in 2011.  She attended Soquel Elementary School, followed by almost three years at New Brighton Middle School, where she excelled academically thanks to the devoted care of her academic aides and teachers.  Despite physical challenges, speaking problems due to the disease and hypersensitivity to sounds, she made the honor roll at New Brighton every semester and was just two month away from graduation and advancement into high school.  Kayla loved to read and especially loved science and humanities. Her unexpected success in all facets of her life was miraculous considering the severity of her disease. She was not expected to survive her first year, nor to ever walk or talk.  During her final year at New Brighton, she was invited to participate in the student council.

Despite her difficulties with mobility, Kayla loved sports, beginning at age three with horseback riding (hippotherapy) at Ride-To-Walk, and continuing with baseball and soccer from age 7.  Kayla played baseball in the challenger league with the Angels, a team made up of individuals living with disabilities.  Kayla’s father loved playing baseball with Kayla on their visits together. In their first game of this season, the weekend after Kayla passed, the Angels had a moment of silence in memory of Kayla and then played her walk-up music, Brave by Sara Bareilles. Kayla participated in Ride-A-Wave and Day at the Beach over the past 6 years. She participated in Day of Discovery snorkeling program at Monterey Bay Aquarium for the past few years. She was a recipient of Make-a-Wish Foundation gift to travel to Hawaii with her family in 2016.  Kayla’s favorite event every year was by far MDA camp for kids living with muscular dystrophy. Kayla attended this camp since the age of 6 and with her very special friend Kali for many years and then this past year with Kali, Zoe and Cambry who all live with DM1.

Kayla faced a life-long struggle with congenital myotonic dystrophy (DM1), the most prevalent form of muscular dystrophy.  Under the care of her mother and her medical team at Lucile Packard Children’s Hospital at Stanford, led by the chair of the Neuromuscular Department,  Dr. John W. Day, MD, PhD., Kayla flourished. She became known throughout the global community of  DM patients and caregivers through her blog, www.cureforkayla.com as many newly diagnosed patients would find Kayla’s story of hope and would reach out to us. Because of Kayla's struggle, her mother Lisa helped to found and became the founding executive director of the Myotonic Dystrophy Foundation (MDF), which funds research into this genetic disorder and provides support to families living with this disease.

Kayla appeared regularly in news stories and on television over the past 13 years and she and her mother were spokespeople and strong advocates for DM. Kayla was named the Youth Ambassador for Easterseals Superior California in 2006 and her story was aired on the Sacramento news. Kayla’s story was updated every year on the Sacramento Muscular Dystrophy Association (MDA)  Jerry Lewis Telethon from 2006 to 2008 and she was the 2009 face of myotonic dystrophy on the National MDA Jerry Lewis Telethon where she appeared with her father Jeff and her mother Lisa. In 2014 Kayla and Lisa testified in Washington D.C. in a Congressional hearing in support of the reauthorization of the MD-CARE Act which was eventually granted. Kayla participated in a longitudinal research study of congenital myotonic dystrophy patients every year for the last five consecutive years at the University of Utah. Kayla also participated in research at Stanford University. Kayla was about to begin a clinical trial at Stanford for a new drug that improves executive functioning. These are just a few of her accomplishments in her short life.

There will be a Celebration of Life of Kayla Michele Vittek at Aptos United Methodist Church on Saturday, April 27, 2019 at 11:00 a.m.. Please RSVP for the event or the live stream: https://www.eventbrite.com/e/join-us-for-a-celebration-of-life-of-kayla-michele-vittek-tickets-60647524378

In lieu of flowers, please consider making a donation to either the Muscular Dystrophy Association www.mda.org or the Myotonic Dystrophy Foundation www.myotonic.org and note in the memo: Kayla Vittek memorial fund.

To send flowers to the family or plant a tree in memory of Kayla Vittek, please visit Tribute Store
Saturday
27
April

Share Your Memory of
Kayla
Upload Your Memory View All Memories
Be the first to upload a memory!
Share A Memory
Send Flowers