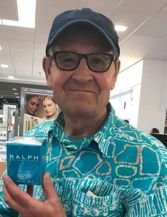 Our dear father, Ralph Swanson, passed away Saturday, June 22.  He was a brave and courageous man, yet lost his battle with mesothelioma at 82 years old.

Ralph was born in Joliet, IL in 1936 to Margaret Wright and Everett Swanson.  He attended Farragut Grade School, Joliet Township High School, and Joliet Junior College. He then went on to Northern Illinois University and Culver Stockton College where he received a Bachelor’s Degree.  Ralph later attended George Williams College and earned a Master’s Degree in Education. He was a middle school teacher for 29 years in Elmhurst, IL.

During Ralph’s younger years, he enlisted in the Army Reserves in 1959 and served until 1965.  While he was attending Culver Stockton College, he met his wife, Nancy Anne Belz of Oak Park, IL.  They married in 1960 for 53 years until Nancy’s passing in 2013.  The couple resided in Clarendon Hills, IL then Lombard, IL for over 30 years, before moving to Santa Cruz, CA. in 1992 to be near their two children, Charles and Cynthia.

Ralph will always be remembered for his dedication to his family, a passionate interest and keen knowledge of cars and their maintenance, his love of reading on historical topics and figures, traveling the United States in his motor home with his family, taking trips abroad, and going to the movies with Nancy.

He is survived by his brother, Arthur Swanson of Roseburg, OR; his son Charles Swanson of San Francisco East Bay; daughter, Cynthia Clancy of Santa Cruz; and two grandchildren, Connor and Cara Clancy.  Ralph was preceded in death by his wife Nancy in 2013; his son, Scott in 1961; mother, Margaret in 1974; and father, Everett in 1994.

Ralph will be laid to rest in Forest Home Cemetery in Illinois, alongside his wife, Nancy and their son, Scott.  A private viewing for family and friends was held on June 25 at Pacific Gardens Chapel. Please consider a donation to Heartland Hospice of Monterey whose caring assistance helped to ease Ralph, making his final days peaceful and comfortable.  Please visit the Benito and Azzaro homepage to share your thoughts and condolences with his family.

To send flowers to the family or plant a tree in memory of Ralph Swanson, please visit Tribute Store
Print
Share A Memory
Send Flowers