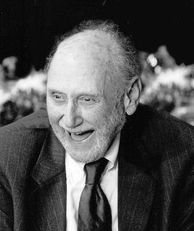 A graveside ceremony will be held Tuesday morning, October 8, 2019 in Santa Cruz, for Leonard Jackel who passed away peacefully on Saturday, at his home with his family at his side. Born to Mendel and Ida Jackel in the back of their grocery store in New York City on April 3, 1923, Lenny was an authentic New Yorker who once skipped class go to see Frank Sinatra. After becoming a veterinarian with a large animal specialty in 1946, Lenny served in the United Nations Relief and Rehabilitation Administration (“UNRRA) caring for horses being transported to Europe after World War II.  In 1947 he married Eileen Blum, a Broadway chorus girl.  Later they lived and worked all over the US and in France, where Lenny completed additional veterinary studies.  In 1957 the couple moved to New Jersey, where Lenny opened a small animal hospital.

Lenny was a devoted fan and season ticket holder of the New York Jets.  He loved travel, Broadway shows, art and music.  When Lenny retired in 1984, he and Eileen moved to Santa Cruz where they enjoyed life to the fullest until Eileen passed away in 1994.

Lenny’s life in Santa Cruz included volunteering at the Cabrillo Festival of Contemporary Music for over 25 years.  He also was a devoted member of Temple Beth El, especially the congregation’s Brotherhood.  His daily passion was coffee at the Pacific Coffee Roasting Company and he also enjoyed stretch class.  Most of all, Lenny loved being with family and friends and relished throwing himself a birthday party every five years.

Lenny was preceded in death by his brothers, Julius and David.  He is survived by his sons Stephen (Barbara) and Jonathan (Nora) ; and grandchildren: Noah (Patricia) and Eden.  He also leaves his great granddaughters Rose and Lillian, and his loving companion of 25 years Dorene Blake.  Lenny had a long, rich, full life that was good as it gets.  He will be missed.

A graveside ceremony will be held this morning (October 8th) at 10 a.m. at Home of Peace Jewish Cemetery on Meder Street.

To send flowers to the family of Leonard Jackel, please visit Tribute Store