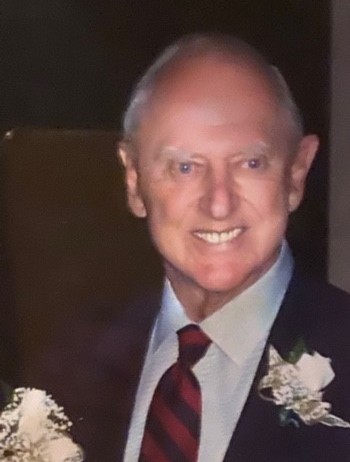 Dr. John W. Hagen passed away suddenly following a brief illness on September 5, 2020 at Dominican Hospital at the age of 93. John was born November 5, 1926 in Chicago, Illinois, the son of Albert Hagen and Anna Lietzau Hagen. He grew up in Chicago graduating from Lane Tech High School where he excelled in football. He attended the University of Michigan and the University of New Mexico where he earned his bachelor’s degree; playing football throughout his college career.  John later earned a Doctorate in Education from UCLA.

John served in the US Marine Corp during World War II and was also an Army reservist. During his time at Michigan State, John met his wife to be, Phyllis Davideit. The couple would later marry and move west to California. They settled in San Bernardino County where John began his teaching career. He later became a school administrator and would eventually become a Superintendent of Schools with his first assignment in Calexico, California.  He would go on to work in several other school districts throughout his career.

In his younger years John was a lifeguard on Lake Michigan and was an Eagle Scout. He was an avid outdoorsman and sports fan. He enjoyed hunting, fishing and off-roading in his Jeep. He enjoyed watching football, travel and doing home and woodworking projects. John earned his pilot’s license and was fluent in Spanish. Mostly John was a family man who derived his greatest pleasure from being with his loving family.

A Mass of Christian burial will be celebrated at Holy Cross Catholic Church 126 High St, Santa Cruz, CA on Saturday September 12, 2020 at 12:00 noon. Friends and family are invited to the visitation at Benito & Azzaro Pacific Gardens Chapel on Saturday morning beginning at 9:00 am. The holy Rosary will be recited at the funeral home chapel on Saturday beginning at 10:30 am.  A private interment with military honors will take place at California Central Coast Veterans Cemetery, Seaside, CA.

To express your condolences or to share a memory with John’s family, please visit http://www.pacificgardenschapel.com.

To send flowers to the family or plant a tree in memory of Dr. John Hagen, please visit Tribute Store
Saturday
12
September

Share Your Memory of
Dr. John
Upload Your Memory View All Memories
Be the first to upload a memory!
Share A Memory
Send Flowers