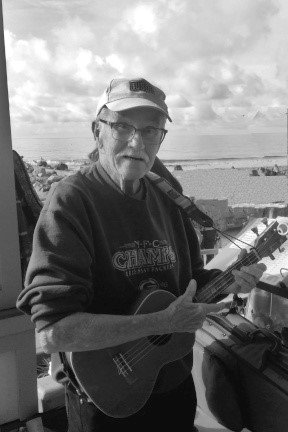 Dr. Gerald Allen Campbell passed away on February 15, 2020, into the arms of his daughter Anna. The cause was metastatic cancer. He was born in Kenosha, Wisconsin, on July 20, 1935, number seven of ten children.

Jerry pursued a graduate degree in mathematics and was a high school math teacher before finding his true calling, medicine. He was drafted into the army upon completion of medical school. After his tour of duty was over, he moved with his young family to Santa Cruz, joining the Santa Cruz Medical Clinic when there were fewer than twenty practitioners. Jerry was a brilliant diagnostician, curious about new developments in medicine until the end. If Jerry Campbell was your doctor, you could be assured of expert care, home visits, fierce patient advocacy, and a willingness to break rules on your behalf, all regardless of your ability to pay.

Jerry was a kind, smart, generous man who loved his family, his patients, golf, classical music, and opera. He also loved playing the devil’s advocate. His wife Donna gave him a ukulele for his seventieth birthday; a new genre of music was discovered, along with scores of new friends.

Jerry was preceded in death by four siblings and his beloved daughter and partner in crime, Anna. He is survived by his wife and companion of fifty years, Donna Lehnhoff; his children Michael (Marina), Susan, and Amy (Neil): and his grandchildren Sophia, William, Griffin, and Lleyton. He also leaves behind his brothers William and Michael, sisters Connie, Bernadette, and Catherine, as well as numerous nieces and nephews, especially his niece Holly and nephew Mark. His faithful walking partners, pups Toby and Coco, are missing him so much.

Jerry supported St. Jude’s Children’s Research Hospital, the Wounded Warriors Project, and animal services in Santa Cruz, in case you are moved to make a donation in his memory. Jerry would like you to be positive, be happy, have fun, and take the time to tell your people you love them as often as possible.

There are no services planned at this time.

Requiescat in pace, my sweet.

To send flowers to the family or plant a tree in memory of Dr. Gerald Campbell, please visit Tribute Store

A Memorial Tree was planted for Dr. Gerald
We are deeply sorry for your loss ~ the staff at Benito & Azzaro Pacific Gardens Chapel
Join in honoring their life - plant a memorial tree

Share Your Memory of
Dr. Gerald
Upload Your Memory View All Memories
Be the first to upload a memory!
Share A Memory
Send Flowers
Plant a Tree