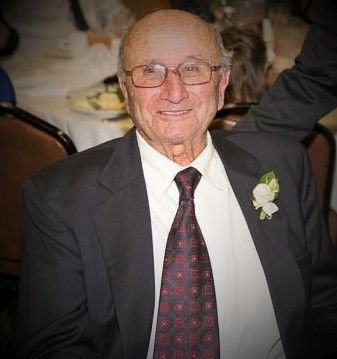 Services will be held on Monday for Edward Pine, who passed away at Dominican Hospital at the age of 93 with his loving family at his bedside.  Born in Los Gatos, Ed worked as a general contractor in the central valley with a career that spanned over 33 years.  He retired as the Operations Manager for Raymus Real Estate in Manteca, where he supervised the construction of numerous subdivisions and housing developments. Ed served his country in the US Army during the Korean War and was stationed in Germany.

Ed, and his beloved wife Sally, built their home on the Westside of Santa Cruz in 1992 and retired here. Ed and Sally were accomplished world travelers, visiting 53 different countries.  He was a talented tennis player; continuing to play well into his 80’s.  Ed loved the outdoors and loved spending hours in his garden in the back yard. His skills at grafting various types of fruit were well known throughout the community. He was also an avid deep-sea angler and hunter.  He was grounded in the belief that kids learned best by doing, and volunteered teaching for 4-H programs, which his children were members of.  Ed was a member of the Santa Cruz Elks Lodge, and he and Sally also volunteered their time at the Mid-County Senior Center in Capitola, where they enjoyed playing duplicate bridge.

Friends and family will gather for a Catholic Blessing Ceremony on Monday June 7, at Benito and Azzaro Pacific Gardens Chapel beginning at 1:00 PM.  Burial will follow at Santa Cruz Memorial Cemetery. A kind charitable contribution can be made in Ed’s memory to the Mid-County Senior Center (829 Bay Ave. Capitola, CA.  95010), if so desired.

To send flowers to the family or plant a tree in memory of Edward Pine, please visit Tribute Store
Monday
7
June