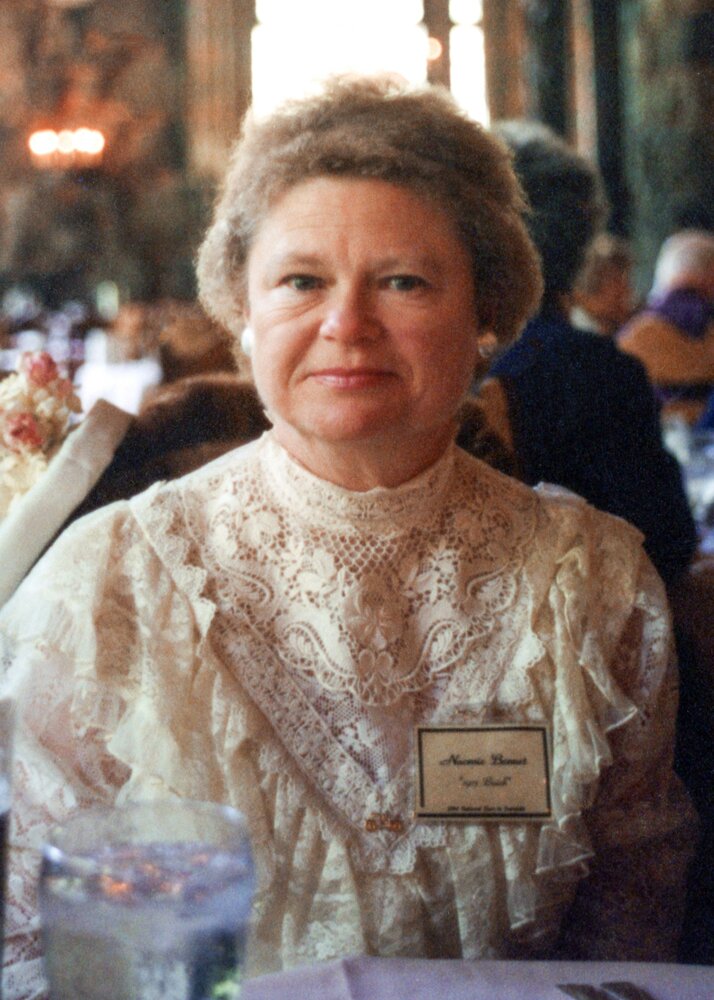 Naomi was born July 19, 1935 in New York City to Louis Paul and Naomi Peterson Gallet.  Her mother suffered a cerebral hemorrhage shortly after giving birth and she passed away without ever being able to go home with her baby.  Naomi grew up in Silvermine, Norwalk, Connecticut with her father and stepmother Edna, later Edna Gallet, who originally entered the family as her baby nurse.  They spent winters in New York where she and Edna had a modeling career.  She once appeared on the cover of American Girl, the magazine of the Girl Scouts.  As a teenager, Naomi worked summers at a family friend's cluster of cottages in the Penobscot Bay area of Maine. Her parents later moved to this area. Naomi graduated from Norwalk High School in 1953 and went on to Wheaton College in Norton, MA where she was a Classics major for a time.
Sometime in the spring of 1955, she and I (Dave) found ourselves on an “arranged” date, and in that evening, we first discovered that we really enjoyed being together.  That feeling was to be reinforced many times for the rest of our shared lives.  We were married September 15, 1956.  We were both just 21.  The marriage lasted 65 years.
We have lived several places.  The first was Easton, PA where the shared endeavor was to get my engineering degree finished.  Then it was Endicott, NY to my new job at IBM and where son Dave entered the family scene.  Then came Mountain View, CA where we got our first taste of the environment we have loved.  After that it was back to New York state where we became sure that California was the place for us.  Next it was to Southern California where Lou was born and then on to San Jose followed by Aptos – home at last.  Naomi went back to school: West Valley College for her Nursing LVN and then San Jose State for her bachelor's degree in health science.  She worked for a doctor as an office nurse enjoying the work but cutting back when the energy crisis made commuting from Aptos to Los Gatos difficult.  After that she enjoyed similar work closer to home.  Her career was interrupted by several years of regular trips to Maine to care for her aging parents.
Between the two of us, the joy of being together never faded.  Besides living in a wonderful place, we have had many special shared experiences.  We subscribed to Broadway quality shows in San Francisco for more than 30 years.  We travelled quite extensively including Europe and the UK often, China, Viet Nam and Thailand, Tahiti, New Zealand, and a voyage around Cape Horn, for examples. We did extensive touring in our ancient “horseless carriage” automobiles to the Western US, Canada, Mexico and even England for a reenactment of the world's oldest car rally, (1896), which we did in 2005.  There have been many moments which seemed too magical to be real.
Naomi leaves me, her loving husband, David, our sons David (Laurie) and Louis (Rachel), our grandchildren Ashley (Angel), Brittany, and Scott (Sonia), our great-grandchildren Joshua and Ethan, and our step-grandchildren Julia, Isabella and Annabella.
Special thanks go to her very dedicated caregivers at Care From The Heart, especially Veronica and Jackie.
We are honoring Naomi's wish that there be no public memorial event of any kind.  Our family is planning a family sail on Monterey Bay for a scattering of her ashes in the spring.  For those who would like to make a donation in Naomi's memory, a contribution to Best Friends (bestfriends.org), an animal rescue organization and one of Naomi's favorite causes, is suggested.