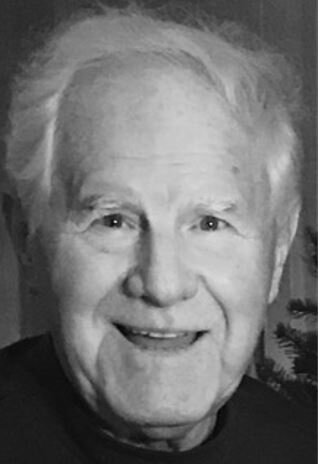 Joseph G. Marvin Jr. passed away peacefully in his home February 23, 2022 at age 93. He was preceded in death by his wife of 70 years, Lila Jean. Joe and Jean were residents of Aptos for over 50 years.
Joe was born in Detroit, Michigan, June 21, 1928. During the depression his family returned to California to live at the grandparent’s farm in Morgan Hill.  This is where Joe learned his work ethic as he and his brother, Hobart, picked prunes in the summertime. Joe always said that once you’ve picked prunes, everything else looks up.
Later they moved to Los Altos where Joe attended Los Altos Grammar School, Mountain View High and graduated from Piedmont High School in 1946 where he was a three-sport letterman and named Athlete of the Year. He later attended Santa Rosa Junior College, and then transferred to UCLA where he played football as a single wing tailback under Coach Red Sanders from 1949-51. He met his future wife at a jazz club in Hollywood and they were married in Santa Barbara 1951. He graduated from UCLA with a Degree in English Literature in 1952. After college, Joe was drafted by the Washington Redskins but injured an ankle in a preseason game and went home to join Jean and baby Diane.
Joe and Jean moved to Redwood City where they raised their three children, Diane, Joseph and Melinda. Joe became the head football coach at Sequoia High School and between 1958-1963 his teams won 33 straight games in a row. In all Sequoia won 51 of 58 games during his tenure there.
Moving to the college ranks Joe was offensive backfield coach at Washington State (1964-65) and Cal Berkeley (1966-70).
In 1970 Joe joined former UCLA teammate Hal Mitchell at Cabrillo College where he taught and coached until he retired in 1989. His record at Cabrillo as Head Coach was 75-22-5.
Joe made many lifelong friendships, mentored many young student athletes and had a positive impact on numerous lives.
Upon retirement from Cabrillo, Joe and Jean traveled to Europe and throughout the United States where they toured many college campuses and attended football games. His memory of past football games and scores was legendary and in his lifetime saw over 1,400 games. Joe’s other passion was jazz, especially traditional New Orleans jazz. For 35 years in a row he and Jean attended the Dixieland Jazz Festival in Sacramento with their friends. Joe loved the Sierra and every summer would hike into the high country and camp with his friends from Los Altos Grammar School.
Joe will be deeply missed by his daughter Diane Marvin-Koenig (George), son Joseph G. Marvin III (Ruth), daughter Melinda Marvin-Strong (Paul) and granddaughters, Celeste Marvin-Strong, Sabrina and Wailana Marvin, step-grandson Nicolas Koenig (Purea), great-grandchildren, Manu Koenig (Leah), Maya Koenig-Corazza (Stefano), Paul Koenig (Britney), and great-great grandchildren Miro’ and Ella Corazza and Kolton Koenig.
Donations in Joe’s memory may be made to The Marvin Athletic Scholarship at The Cabrillo College Foundation and to Hospice of Santa Cruz County. A celebration of Joe’s life will be held May 14th at the Sesnon House in Aptos. For more information contact dimarvin@cruzio.com

To send flowers to the family or plant a tree in memory of Joseph Marvin Jr, please visit Tribute Store

Share Your Memory of
Joseph
Upload Your Memory View All Memories
Be the first to upload a memory!
Share A Memory
Send Flowers
Plant a Tree